One of the main stakeholders in land to the south of the city is the University and between the old institutions and the more recent pretenders there is a wealth of modern architecture to behold.

At St. Amselm’s Hall, the architect chosen to extend the original Georgian house with new study bedrooms and a dining hall was also selected to prepare a scheme for the adjacent stand-alone chapel, H.S. Fairhurst & Sons. The Chapel was supported by a board of Trustees and procured in parallel to works commissioned by the university for the rest of the halls complex.

Discussion concerning the commission began in late 1959. The plans for the Chapel had been finalised and sent to London for approval by the Church authorities in May 1960 and were signed off by early July the same year. Construction began in November 1960 and the dedication was conducted by the Bishop of Manchester on 13th October 1961, followed by a visit from the Archbishop of York who spoke at a service held two days later. Both of the services were conveyed by CCTV to the dining hall due to the spatial constraints; the hall committee minutes note that ‘it was not a success, but those in the dining hall in fact joined in heartily’.

The chapel itself may definitely be described as hidden. It is surrounded by buildings and mature trees within the traditional large plots that characterise the once affluent suburb. It is octagonal in plan and is wrapped on three sides by a single storey structure that forms the narthex and organ recess. A continuous band of clerestory glazing runs above a sculpted frieze, by Anthony Hollaway, at the head of the wall and bespoke lighting clusters are suspended at four points. The pews, designed to accommodate 90 of the 120 students in residence, are also unique to the chapel. At the rear of the space the entrance doors are flanked by a pair of beautifully detailed timber box-pews. The doors and the pews together form a single piece of furniture and subtle relief and perforations in the structure moderate the acoustic properties of the space. Behind the altar is a faded, but nonetheless powerful, embroidered tapestry by Audrey Tucker.

Externally it is only the proportions of the building that are remarkable, akin to the sort of stretched volume that Zumthor affords his chapels. The red brick walls and copper roof mimic much of Fairhurst’s work for the University of this period. Hanging centrally from the face of the chapel volume is a bell also sheltered under a copper canopy the bell rope hangs into the narthex and is rung to announce the start of service. The chapel remains in use to this day. 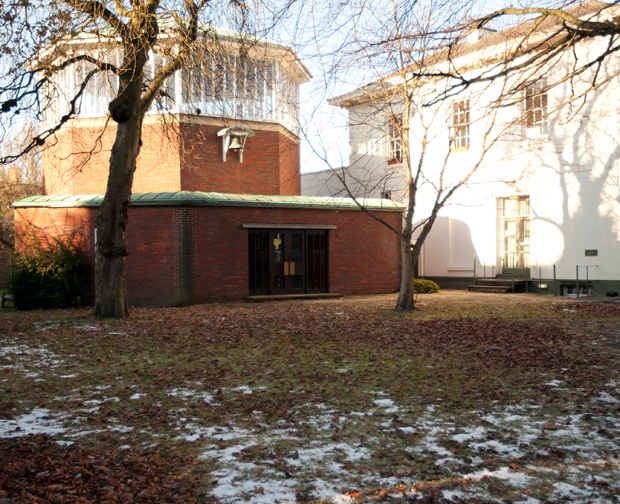