The police station and magistrates' court at Chorley was designed to replace a building from 1896 – a weights and measures plaque from the original building was retained and remounted at the foot of the new building. The two buildings were set adjacent one another and around a newly formed square with one side made up of the rear of the existing town hall. This small civic group was intended to relate to one another in scale, but was markedly contrasting in its material make-up. The design team was Roger Booth, Lancashire County Architect; C.A. Spivey, Assistant County Architect; D.B. Stephenson, Design Architect; and D.G. Edwards, A.G. Gass, responsible for the detailed design and construction. The seven-storey in-situ concrete framed main block was the last bespoke police station to be built in Lancashire, following this the department developed a systemised concrete construction method which was deployed across the county. The dramatic cantilevers gave the new building a stature and presence that signalled authority. The lower levels were accessed by ramps and provided space for police vehicles. To enter the police station one ascended a set of external stairs across a pool that once contained koi carp – fittingly, one boy described the new building as a ‘fishtank’ upon its completion. The magistrates’ court was finished externally in a grey brick and carried the signature pyramid rooflights that were synonymous with the Department. 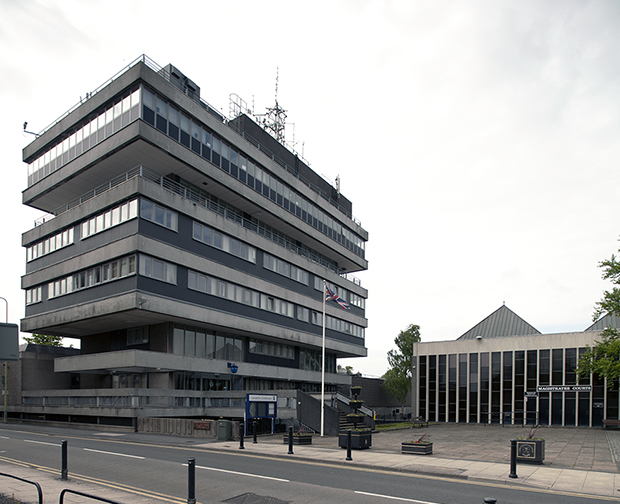