In 1939 J.W. Beaumont & Sons were an established Mancunian firm, Beaumont himself began independent practice in 1872. Their earlier commissions included the Whitworth Art Gallery (1908) and Lewis’s on Market Street (1929). Kendal Milne, now House of Fraser, is one of two buildings in this volume completed in 1939, though neither opened until after the cessation of conflict in 1945. The other is the Daily Express Building. Both were latter day art-deco remarks and realised with a quality that attests to a recovering northern economy immediately prior to the outbreak of war. Following the Great Depression, it took longer for the economy to grow in the north than in the south, and the lack of major buildings from the 1930s is testament to such. This elegant, five-storey department store exudes an air of restrained British modernity, stylised, but still wearing a starched shirt. It has both neo-classical and modern influences and was revised significantly during the design stages. The facade, composed of vertical bands of glass and Portland stone, reveals itself as a cladding, yet still alludes to the structural properties of the wall by playing with the image of column. The store’s situation within the city grid does not position it as the terminus to any views; consequently, without looking up, one may easily read only the shopfront, which reveals none of the period, albeit polite, detail seen above. 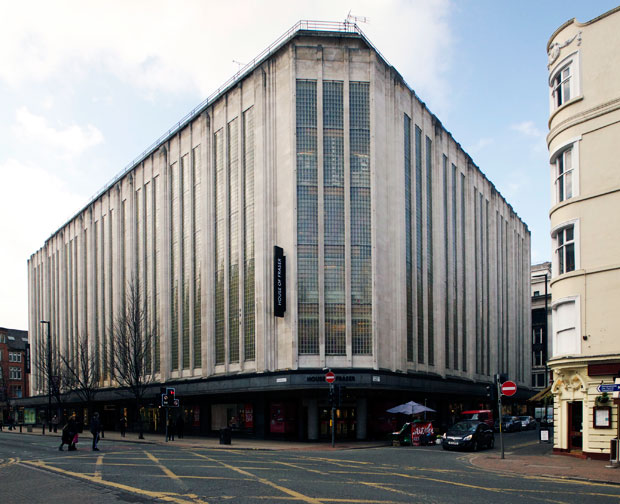