This church was designed in 1964 and predates Williams’ St. Augustine’s at All Saints in Manchester. The modest and hidden exterior belies some of the simple beauty of the interior, created by a novel plan form and structural solution that references Byzantine geometries. Williams is known to admire historical cultures. There are features that were developed in the later building, including C shaped masonry bays framing full height glazing. The glass used was ‘antique’ intended to give a ‘jewel like’ quality to the cast light inside. Designed to hold 500 worshippers, St. Patrick’s has an upper gallery whose front edge curves to follow the line of the domed roof above. The roof is supported on 8 columns, which act as framing and enclosing devices within the symmetrical plan. The original finishes were deliberately modest, to draw ‘attention to the altar’. Some are now obscured, such as quarry tiles covered with carpet, but the sense of calmness and simplicity remains. The church building replaced an earlier one on the same site and was in advance of the general redevelopment of the town. It now rests in an odd area of Rochdale, slightly cut off by main roads and amidst light industrial units. It’s not obvious, but is something of a lost gem and made all the more fascinating by its obscure setting. 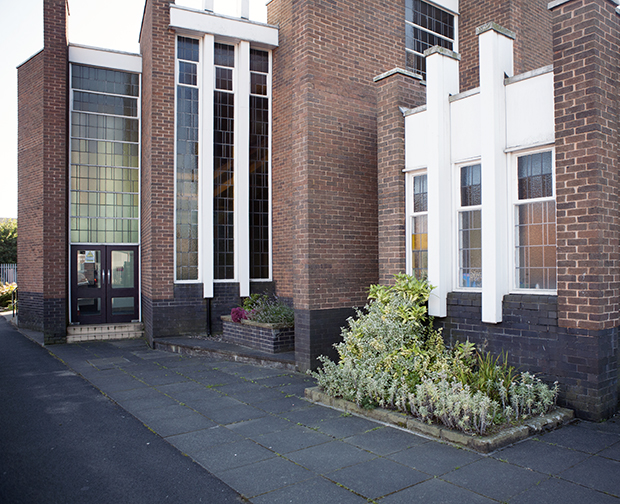