This fairly invisible, but elegant and well proportioned block, made for Salford City Council is contemporary to the development of the slab and point blocks developed by London County Council Architects department. It is only with time and with the demolition and loss of many mass housing schemes that the merits and character of the period comes into focus.

This particular survivor has a number of qualities that have perhaps contributed to its longevity and current state of good repair, not least of all the involvement of the Trussed Concrete Steel Company (Truscon). Truscon invested heavily in the research and development of their product and its possibilities, even going so far as to publish their own journal which was professional and unbiased in its content and full of inventive and experimental construction solutions. In the article about Canon Green Court the collaborative process is acknowledged as important to the realisation and the aim of working with the architect directly in the development stages was to optimise costs that had been widely disparate in buildings of similar types. The aim of Truscon had been to develop a basic frame type that could be recommended to Housing Authorities, by working with Cruickshank and Seward they were able to offer a comprehensive scheme and to use advice from the Ministry of Housing and interested departments in the local authority to fine tune the proposal.

The modular concrete frame could accommodate one and two bedroom flat layouts, the one bed. layout was shallower than the two bed. and its insertion gave depth to the facades; the relief was further articulated with recessed balconies. Essentially a slab block system, the modular frame could also form 'H' shaped plans and other arrangements of perpendicular blocks. This flexibility allowed a site-specific approach to layout and was thus more than a simple modular construction system. In the hands of C&S the long axis of the scheme followed the ridge of a gentle mound and the perpendicular blocks aligned with the fall of the slope towards Blackfriars Road. The result was a formal configuration that still sits convincingly in its landscape and creates well organised and observed space around it.

The reinforced concrete frame, as was common, was exposed on all elevations (it is unknown whether remedial work has since been carried out, other than perhaps specialist paint) and almost all the columns had the same dimensions to ensure that formwork could be continually reused during the in-situ casting. Moving the circulation to one side of the building rather than using a spine meant that the lateral walkways acted as stiffeners and thus reduced the demand for concrete cross-walls. This organisational planning was actually informed by a response to Salford's local fire regulations which, at the time, required external circulation at each level of a multi-storey block. This confluence of local knowledge and local statute had a significant effect on the development and the wider use of the system by Truscon elsewhere in the country as they note, 'we have in hand a well considered solution to the problem, adaptable to the needs of all interested Authorities'. 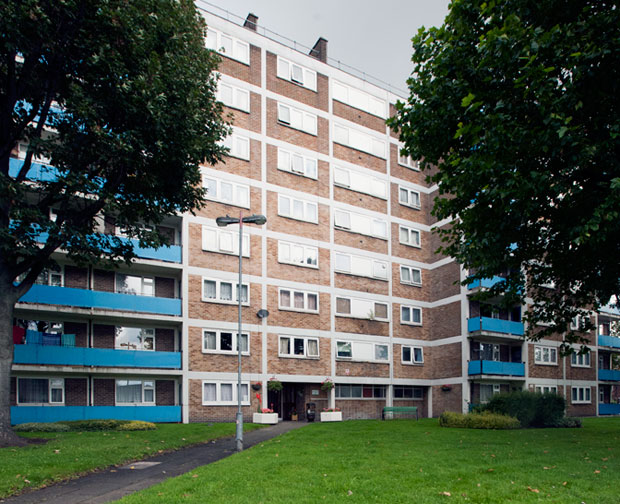