This group of two buildings and a hard landscaped urban space between is included simply by virtue of the fact that until 2016 they were the only building attributed to Foster in the city; they were joined by his Maggie’s Centre for cancer care at Christie Hospital in 2016. Foster was born and grew up in Levenshulme and studied his first degree at the University of Manchester. Until relatively recently he had no buildings in the region; this group was joined by an Urban Splash apartment scheme in Altrincham, also completed in 2007. These speculative office buildings are simply an efficient, easement dictated commercial group; the ground floor, typically, houses restaurants. The form and height were dictated by the Spinningfields masterplan. The quality of finish to the public realm is high, but the viability of these spaces outside of the working week took years to develop and still has a slightly vacuous air. The site used to be that of the magistrates’ court by Yorke Rosenberg Mardall (1971). Ultimately it was intended that these buildings are joined by a thirty-five storey tower, also by Foster, but time put pay to such a scheme and now the site slated for such is being developed as No.1 Spinningfields and designed by SimpsonHaugh & Partners. 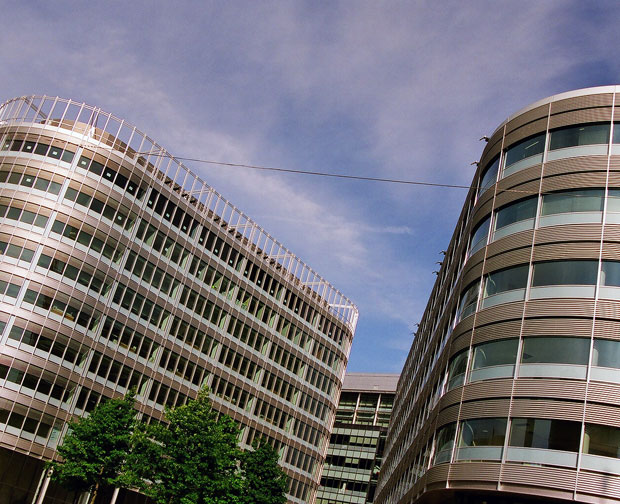