The ‘upside down’ houses of Chimney Pot Park are in a tough part of Salford and part of the Urban Splash mantra to challenge convention and test the idea of design innovation as a catalyst for wider regeneration. Of course, the rows of terraces came at knock down prices to the developer and undoubtedly yielded a good return, but the vision was bold and not without risk. Langworthy, or Chimney Pot, Park is a former reservoir that acquired its nickname after it was filled in to create raised gardens. The gardens are at the eaves level of the adjacent terraced streets and allow views of the staggered slate landscape peppered with red brick chimneys. In the conversion of the existing terraced houses Shed KM have flipped conventional living around. The bedrooms and bathroom are on the ground floor and the living spaces and kitchen are over the upper two floors, utilising the roofspace. The space between the rear walls of the terraces has become secure parking for the residents and is capped with gridded steel that allows light into the parking areas and for the residents to use the external space at first floor. The outside private areas, whilst delineated, are not enclosed per se and each house can access the entirety of the upper level, this may have promoted an uncommon sense of community or resulted in some interesting neighbourly debate. The defining features of the new development were the light scoops, designed to draw daylight into the roofspace and playing with the traditional idea of chimney. 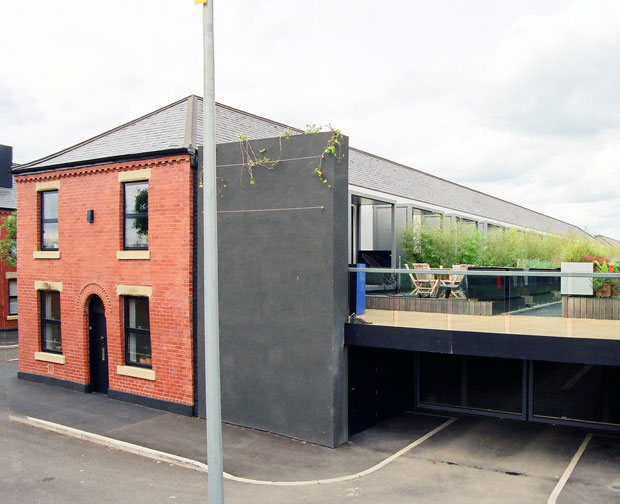