Tucked away, but by no means discrete, this is not typical of Leach Rhodes & Walker’s buildings of the mid-century. Most of their commercial buildings used modular forms of construction in orthogonal geometries. Originally situated on an island site formed by the rails of the trains serving the dockside, the curving tower had presence as a distinctive object surrounded by lower functional buildings. This relationship has been lost and the scheme now feels hemmed in by later development following the creation of an Enterprise Zone in Salford Docks in 1981. When it opened, the scheme was a symbol of the buoyant success of Manchester Liners, an import and export company. It was reported as curved to ‘represent the bridge of a ship’. An extended canopy formed an American style porte-cochere for the motorcar. The foyer was lined with a luxurious grey marble and contrasting soft furnishing in cream. Inside were offices, a bank, restaurant, general store and two hairdressers, adjoined by a further two blocks including a customs hall. The whole site was served by its own petrol station and supposed to be a one-stop shop for the employees who were relocated from existing city centre premises. A recessed uppermost floor, with a projecting roof, crowns the ten-storey block that gives elegant proportion to the scheme. In April 2016 planning permission was granted to transform the offices into apartments. 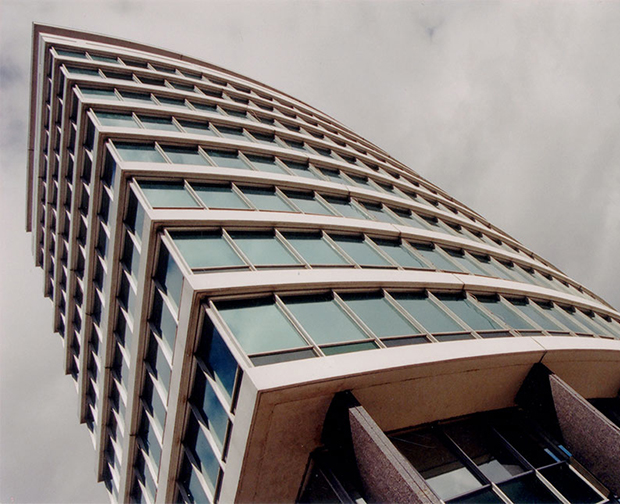