This concrete slab block was designed in 1970 to accommodate a range of council services that were distributed in various buildings across Stockport town centre. At 105m in length, its presence was assured and was certainly the largest scheme built under J.S. Rank’s direction as Director of Development and Town Planning. Despite its modular façade, made from over 1400 repeating panels, and rather grey brutal appearance, the aggregates for the concrete panels were carefully considered to match the stone of the existing town hall (Sir Alfred Brumwell Thomas, 1908). A mixture of granite, sand and white cement was settled upon and deployed in both the precast and in-situ cast elements which were variously smooth, bush hammered and ribbed. The top floor used to house the staff canteen with commanding views over the town. Two further blocks, perpendicular to the main building, were planned to enclose the piazza, which was created towards the main A6 road running through the town, and intended as a foreground to the new group. The piazza was supposed to contain a wall of water between its two levels, but was never fully completed. Mature trees in colossal concrete planters give an idea of just how verdant the landscaping was supposed to be. BBC producers who filmed large portions of the 2006 drama, Life on Mars, set in the 1970s capitalised upon its period appearance. 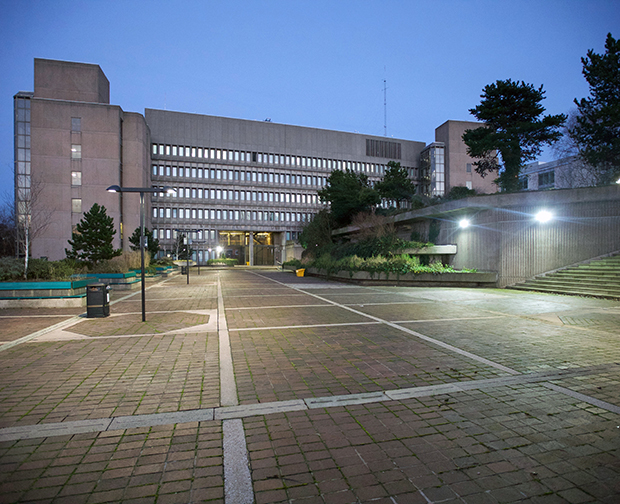