Pevsner described this as an ‘impeccably refined office building’, yet despite this it was turned down for listing in 2009 and demolished shortly afterwards. Sagar House was designed by little known architect William Field and signalled the arrival of the International Style in Lancashire, referred to as ‘a text book example of Modern Movement design’. The first use of the building was as a headquarters for the textile firm Carrington and Dewhurst, who merged with Viyella in 1970. The last occupier was the holiday firm, Pontins. Stood in a lawned setting, this was clearly informed by American commercial precedent and took its detailing cues from the later work of Mies van der Rohe. The long low two-storey block was of concrete frame construction and extensively glazed using an aluminium curtain walling system. The porte-cochere to the front of the building led into the reception area with marble floor and distinctive oval lift shaft clad in timber and wrapped by the main staircase, itself made of cantilevered metal steps. A small gatehouse at the front of the site adopted the same architectural language. 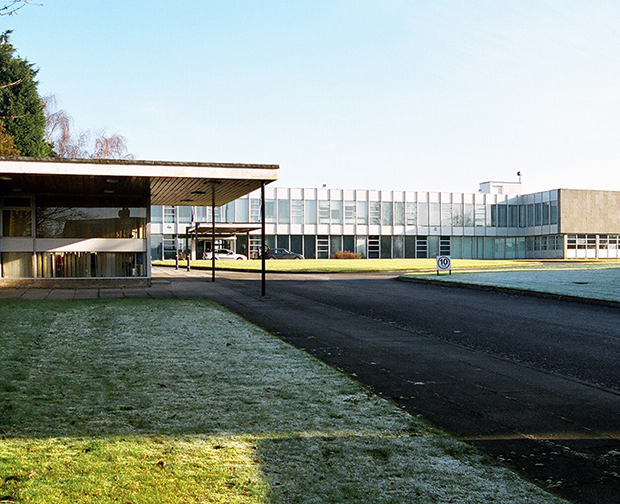