From the works attributed to him, it is apparent that L.C. Howitt was not the most progressive of architects. In his capacity as City Architect, though, perhaps there was a civil restraint to his hand. This crematorium is north of the city centre and is approached via a winding drive through the cemetery that terminates facing the main façade. The curved plane of this elevation has at its centre a cross, formed from blue mosaic and terrazzo and is backed by stained glass between Portland stone mullions. This window forms the rear wall to the main chapel, this space flanked by two smaller side chapels. Each of the side chapels has a dedicated exit sheltered by curved concrete canopies, the most expressive external elements. A remote block completes the group, for the Registrar, including a duo-decagonal plan Chapel of Remembrance, effectively a drum like form. The exposed concrete structure of the drum is of its time, yet the years have not been kind, there is a functional air about the maintenance of this building. Its form and scale mirrors that of the observatory on the opposite hill next to Heaton Hall in the park. 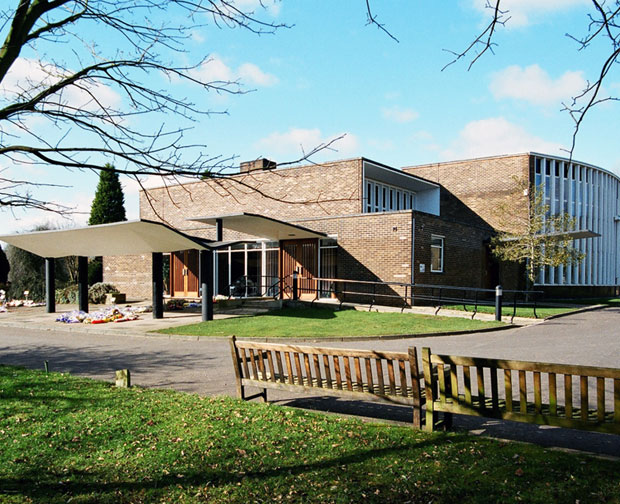