This former production plant for concrete components is now sadly partitioned and houses a number of businesses, only one of which still has a manufacturing base. The engineer for the project was also the client; reinforced concrete engineers, Matthews & Mumby. The intention was to create large floor areas, free from columns, to accommodate fourteen casting beds of about fifty metres in length. The structure of the two sheds was formed from arch units assembled on the ground, jacked into position and post-tensioned to form large tied span arches. Each arch spans approximately thirty metres and was designed to carry up to fourteen one tonne loads along the monorail hangers that ran the length of the factory, centred to each casting bed and suspended from the arches. Lantern section glazing hugs the curve of the arches that act as a reflective surface to provide an even light across the factory floor. The rails and hangers added a further louvered filter to the light, described at the time as ‘the ‘venetian blind’ effect. Originally the elevation between the V shaped columns was also glazed, this has now been filled and significantly reduces the aesthetic presence of the exposed structure and a distinctly ‘modern’ building of the time. The hanger rails and runway beams remain and the desired even calm of the natural light may still be appreciated internally, illuminating the Japanese mini-diggers stored within. 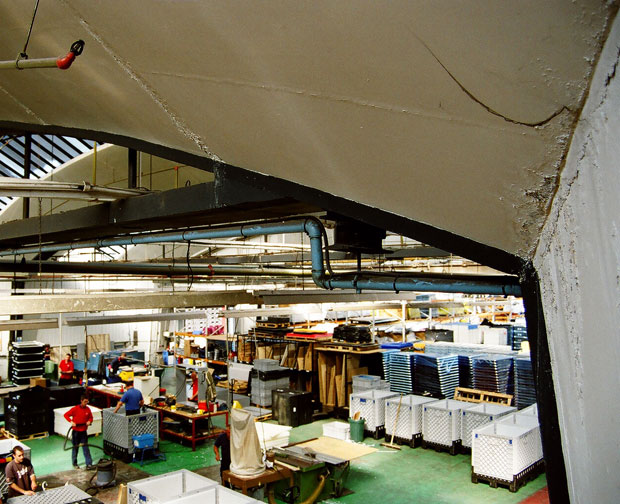