These seven blocks of flats, known originally and rather clinically as Falinge B ans also referred to as College Bank flats, became popularly known as the Seven Sisters. Designed by Rochdale’s Borough Surveyor, Mr WHG Mercer and Mr D Broadbent along with Mr EV Collins, chief architect to contractors George Wimpey and Company. On Friday, October 1, 1965, a new era in Rochdale housing began as the Minister of Housing and Local Government, Richard Crossman, officially opened the first of the College Bank flats - Underwood. the names of the blocks were taken from the buildings and streets that the flats replaced. They are of concrete construction, with dark brick facing and a recessed balcony to each flat. They sit half way out of the valley of the River Roche, that cuts through the town, in a very deliberate position to the townscape and to each other. Variously 16 and 20 stories, the hillside array is composed to minimise overshadowing. At a time when positions as architects in local authorities were well paid and received a wide array of interesting commissions, these blocks, whilst not pioneering, were well considered and well handled in form and material. By placing the flats below the ridge, their impact is softened and they appear to nestle into their hillside. These blocks were intended to attract a new young urban professional to Rochdale and were built to a high specification with generously sized flats. In the early 1960s Rochdale was changing. Like many small post-industrial towns it was trying to reposition and rebrand itself as a modern place. The planned inprovements included a ring road to solve congestion. It would soon be connected to the M62 motorway. These flats sat above a college building by Yorke Rosenberg & Mardall (1963), now unrecognisable beneath the ubiquitous cladding. Across the road was a new police station and magistrates court by the confident Lancashire County Architect's Department. The residents of four of the blocks have been told that they will be demolished in the coming years. 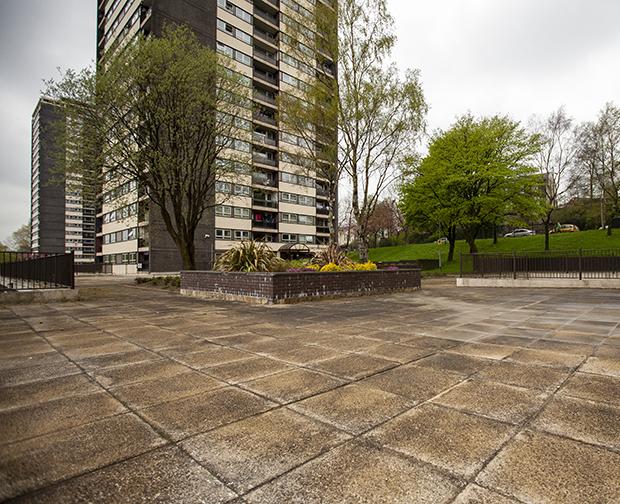