This is one of a series of smaller churches designed by Spence during the 1960s. Spence was approached in 1956 to prepare designs under the Bishop of Manchester’s New Churches Appeal. One of the conceptual sketches was eventually displayed on the walls of the Royal Academy. In front of the church stands a cross, over twenty-two metres tall, this is built from a darker brick than the main church building and apparently intended to give ‘the impression of age and stability’. The outward simplicity of the form conceals the subtle shifts of light promoted by the interplay of the volumes. The chapel to the left of the entrance is framed by a glazed band, which visually separates it from the main church. The unbroken walls to the sides of the church mean that the cast light behind the altar draws attention toward the sanctuary. Within the sanctuary, the communion table, font and lectern are all by Spence and use the typeface developed by Ralph Beyer for use at Coventry Cathedral. The church also contains four stones brought from prominent Christian locations across the globe including a rose hued stone from Assisi itself, these are embedded in the walls and floor around the building. The church closed in 2012 due to dwindling congregation numbers and has been used for various purposes since. 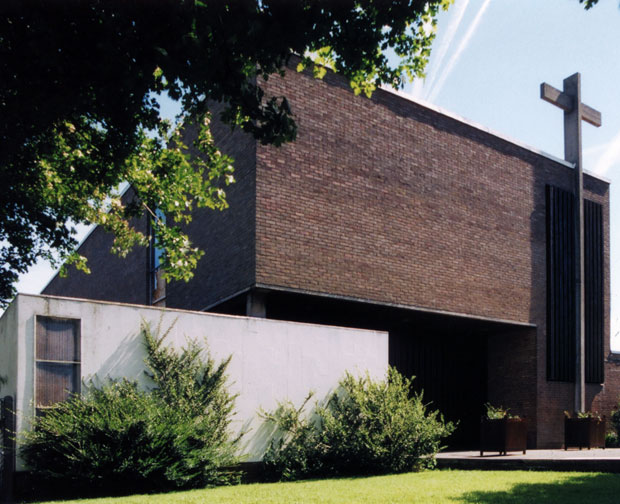