The Domestic and Trades College, latterly the Hollings Faculty of MMU, is familiarly known as the ‘toast rack’. A contemporary report referred to its arching concrete structure as ‘like croquet hoops’. Whatever the analogy, the building was striking in a Manchester ‘where the whimsical [was] frowned upon in favour of more satisfying outlets for invention’. In terms of its unusual form, one anecdote recalled a young architect sketching a throwaway cartoon of an ovoid building and Howitt liking the result! In the largest of three buildings that formed the college, twenty-three arches rise to a height of about 40m, they are not parabolic, and are best described as tapering. The explanation for the form in the architectural press was for the varying size and loading demands of the diverse specialist provisions. Hairdressing, baking, ‘housecraft’ and art were all taught and accommodated in the tower and the clothing department housed in a single-storey, steel framed, block behind with a distinctive saw tooth roof. A two-storey U shaped block to the Wilmslow Road side of the site housed the catering department and a public restaurant. The concrete frame of this block is also expressed, as continuous fins up the façades and across the roof. The space beneath the tower was reserved for parking. In 1996 the central space, or ‘drum’ was remodelled to designs by Mills Beaumont Leavey Channon (MBLC) to provide new library and study space. The site fronts onto Wilmslow Road, a main arterial corridor to the south of the city. As many buildings in this particular area, the structure does not extend to the site’s edge, rather, it stands proudly in a field-object relationship. The development of Wilmslow Road as a major turnpike southwards out of the city, and later the coming of the railways, meant that Fallowfield was inevitably swallowed up by increasing urbanisation, and its open rural nature was changed irrevocably and forever, though the pattern of development, a park, residential halls, sports fields and education buildings do maintain some semblance of openness. The site was sold to a developer and in 2016 planning permission was granted for conversion into apartments. 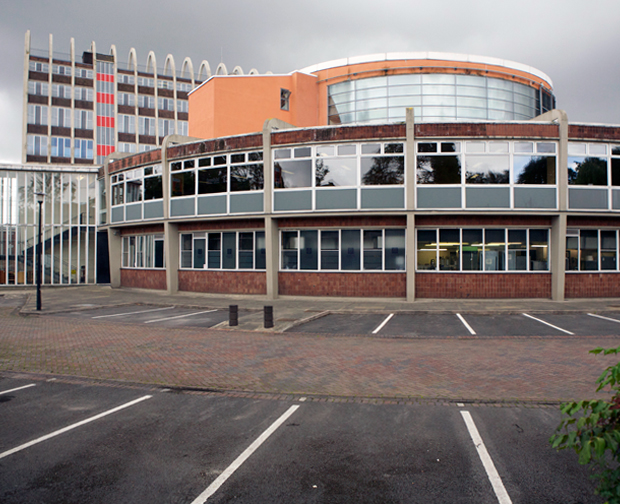