Airports are the new border towns of the late C20 and early C21, as defined by Marc Augé and others commenting in the 1990s. As such, these environments are ever shifting and responsive to the trade and economic opportunities presented by the typological landscape. Manchester is no exception, the original airport, by G. Noel Hill and known as Ringway, was completed in 1938, only to be replaced less than thirty years later by Terminal 1, which was built as the role of City Architect changed hands. L.C. Howitt had originally prepared the scheme in 1954, but construction work did not start until 1957. Besant-Roberts designed the subsequent expansion in 1973 and since, Scott Brownrigg & Turner, Nicholas Grimshaw and Aedas have also contributed to the sprawl. It is the 1962 edifice that sticks in the collective memories of those from the region, particularly the commission and delivery of the interiors. It was James Cubbitt and Partners who designed the passenger areas with input from Leonard Saxby and students at the College of Art and Design. Perhaps most striking were the colossal Venini chandeliers, hung in the main concourse and a relief map of the world by Ceramic Consultants, which were sadly both removed during renovation in the late 1990s. Still at the airport, though sadly forgotten in a corner of the railway station, is the sculpture Ascent of Man by Elizabeth Frink. It is virtually impossible to read original fabric from the layers of terrazzo, stainless steel and moulded cladding panels that now define the interior. Similarly, the exterior has been tidied up by phased development that ensures continuity of service and typifies the manner in which airports expand in a patchwork agglomeration of forms and materials. 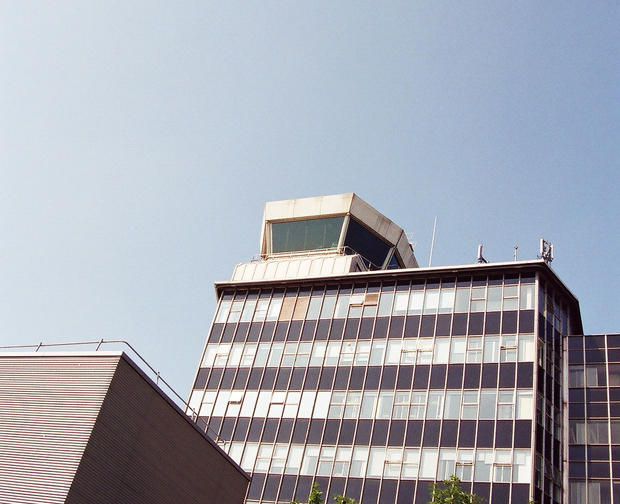