St. Mark’s is more typically exemplar of the work of Pace than the William Temple Memorial Church in Wythenshawe, also included in this volume. It is a mannered and restrained response that configures to the conventions of the ecclesiastical typology whilst drawing heavily on the modern idiom. Unlike some of Pace’s commissions which lasted for lengthy periods, St. Mark’s was conceived and delivered in just three years, between 1960-63. Internally one can read the strong orthogonal geometric arrangement of the windows; those that flank the sides of the building are of clear glass and set out evenly, though not symmetrically, between the dark brick piers. Amongst the more subtle moves that are externally apparent are concrete header beams at eaves level with visible shuttering marks. Scarpa style hoppers collect the rainwater. From inside, the gable wall of the church, behind the altar, mixes masonry and exposed concrete structural lintels to house a striking composition of both clear and stained glass. There is a robust quality to the outward appearance of this church, perhaps reflective of the industrial heritage of Oldham. The laminated timber structure, visible internally, implies a reference to the local agricultural industry. The forked columns lighten the appearance of the structure and the sensation of this as an airy space contrasts against the solid exterior. Though of the modern age and consciously aware of contemporary critical culture Pace was also a great believer in the tradition of reuse of artefacts and features in church building. He actively sought such elements and in St. Marks, amongst others, used Victorian pews. 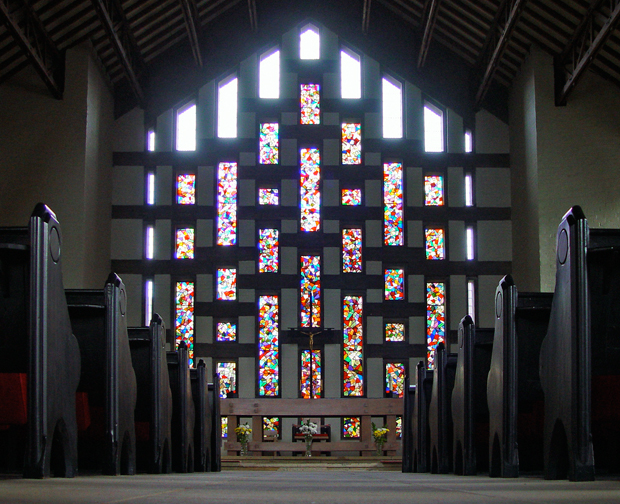