This fairly anonymous seven-storey office block, nonetheless visually stands out due the exposed white concrete finish, and latterly, the poorly judged application of over scaled steel stickmen abseiling down the Chorlton Street elevation. The modest scale of the scheme is undoubtedly due to its proximity to the Brittania Hotel, Grade II* listed, formerly Watts Warehouse. The precast concrete cladding panels are patterned and textured to the gable ends. There are the typical 1960s leanings toward self-sufficiency and containment within an urban site; twenty-eight parking spaces were provided at ground floor between the reinforced concrete columns of the primary structure and each floor had its own service provision, thus the speculative office building was able to be subdivided dependent on market forces. The large pivoting hardwood windows were double-glazed from the offset and as such have not been replaced or modified unlike many of the metal framed glazing systems of the time. Unsurprisingly, the foyer, originally finished in black terrazzo, white marble and hardwood, has been adapted to reflect shifting commercial demands. 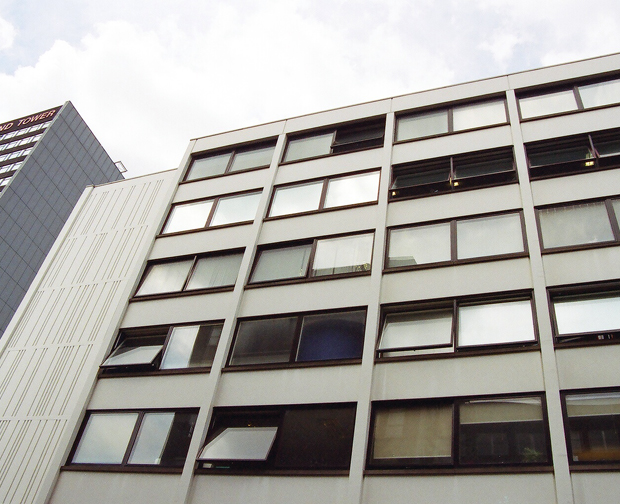