This scheme pre-dates Wilson Womersley’s appointment as masterplanners for the Education Precinct but exists harmoniously with the later series of buildings. This is most likely due to the method of development before any ‘grand concept’. The incremental expansion of the University, following WWII, was largely dictated by the progress of compulsory purchase orders; this group was no exception. At the planning stages, the lack of a masterplan led to organising the wings of the buildings in an open, orthogonal arrangement. This would allow expansion in a number of directions, according to the next available site in ‘the dynamic situation’. The result was the creation of a small courtyard flanked by two five-storey blocks and a two-storey structure. All three buildings use the same pink-grey concrete. The plastic qualities of concrete were explored in both cladding and structural panels and the textural qualities exposed in the bush hammered columns, to reveal the Derbyshire gravel aggregate. The sculpted and moulded panels on the two-storey block and on the gable ends of the larger blocks were designed in collaboration with William Mitchell. The only other materials in the external envelope were the windows of variously clear and tinted glass. The window modules were set out against a basic geometry in three standard patterns and applied across the façade. This resulted in a clever interplay of vertical and horizontal expression. Phase II, a seven-storey teaching block, was not as refined in its details. 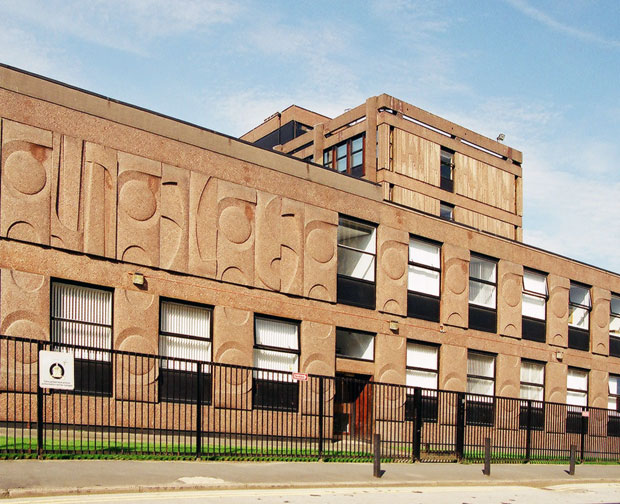