Link Road 17/7 linked the radial roads Ashton Old Road (7) with Regent Road (17). Thus connecting the eastern manufacturing sites with the export facility of Manchester Docks. It was given the name Mancunian Way following a competition in the local press. The road was originally proposed as a surface level bypass, until, in 1959, traffic projections demonstrated the inadequate capacity such a proposal would deliver. The first phase was a 1.2 km (3/4m) section that was designed to link across the southern edge of the city. Maunsell, who also designed the Hammersmith Flyover (1961), acknowledged the assistance of the City Architect, S.G. Besant-Roberts, in the visual appearance of the motorway. They decided to allow free expression of the structure and not to clad any of the concrete surfaces. The arrangement of spans was developed with respect to the ‘economy of construction and satisfactory appearance’. Twin parallel, pre-stressed concrete decks bridged the thirty-two metres between single central columns on concrete piles. The drainage solution was integrated with the expansion joints. Energy was considered to be so cheap and available that electric heating to the road surface was even considered. The scheme received a Concrete Society award and was sufficiently innovative to be the subject of a documentary that charts the construction. The spaces it created beneath have always been quite hard environments. Little can grow in the shadow of the road and its polluted atmosphere. The underpasses and sunken drums of the roundabouts have supported sub-cultural expression since their earliest days. Many surfaces are covered in graffiti. It is as heavily used today as it ever has been. 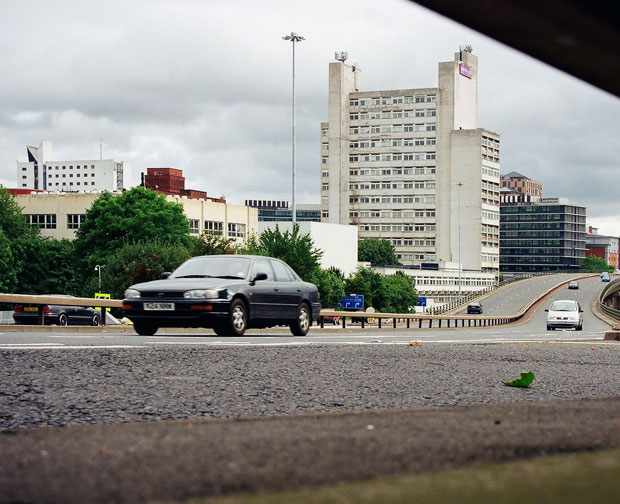