John Mather grew up in Levenshulme and studied architecture at the Municipal School of Art from 1945. His drawing and studio time was spent at the Grosvenor Building and structures and engineering was taught at the Technical College on Sackville Street. The Manchester that Mather knew after the Second World War was far removed from the glass and steel collage of the twenty-first century, he recalls surface car parks galore on levelled, bomb-damaged sites. It was not until the 1960s that there was any perceptibly visible recovery in the centre. This was when Mather and Nutter were commissioned to design the new chaplaincy in the heart of the university campus. Reynolds & Scott had previously developed designs that were not met with great enthusiasm from the church, Mather, through association, fell upon the opportunity to comment and grasped it with a biro and the back of an envelope. The brief included ‘a response to the Church of the Holy Name’, the Grade I listed building next door, Mather was, understandably, bewildered. In the end, the modern gestures of the tapering columns and folding roof to the front elevation formed his interpretation. The columns that run from the first floor, up three storeys to the roof are free from any connections to the floor slabs; the second and third floors are hung from the beam in the roof, a clever solution by Ove Arup. The ground floor was a magnificent open space, leading the eye through to the courtyard beyond, tiled in polished green terrazzo. Unfortunately, this space became a bank, before reverting to a chaplaincy common area and much of the original detail was lost or is encased in partition walls. 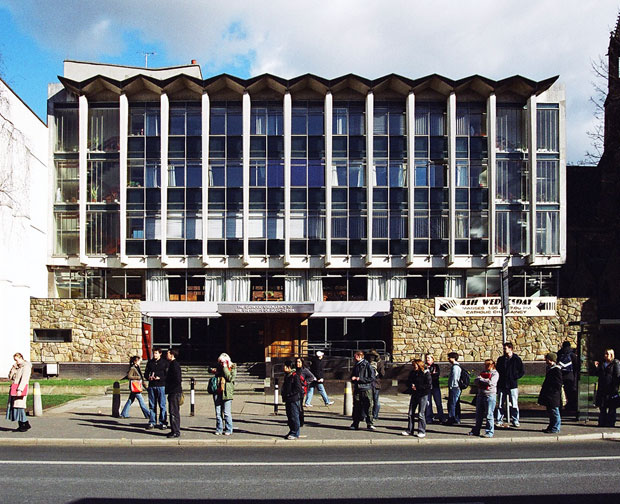