This is the most modern of any of Pace’s churches. Sharp referred to it as ‘a sort of workshop for worship’. Built to serve the expanding district of Wythenshawe, it was in keeping with the architectural approach applied across the area. The plans for post-war Wythenshawe were very much concerned with modernising, mostly through amenities accessed by motorcar. The new phase of development did not necessarily jar with the inter-war planning of the earlier Garden Suburb, which was generous and open. Some visible motifs here are familiarly Pace, particularly the window openings to the gable wall. The bold copper roof and roof windows in prominent cowls are less typical. More distinctive is the interior, made of castellated steel beams and columns and bare brick and concrete. The honest expression of every material, from the structure to envelope and internal walls, alludes to an industrial language but the careful detailing belies such an ascription. The formal definition and delineation of each act of worship beneath the overarching roof canopy offers an idea of the sequences of the ceremonies to be performed. Only the parsonage and sacristy sit outside of the cover of the  ‘workshop’ and are adjoined to the main volume. An enclosed chapel, set within the main space, establishes the diagonal geometry of the choir stalls, altar and font, which place the celebrant at the heart of the service. As elsewhere, Pace specified reclaimed pews from an earlier church building. 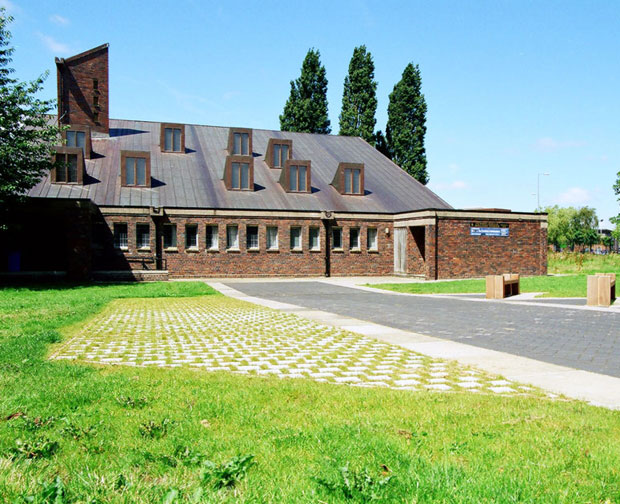