Formerly known as Scottish Life House, this office block sits on the corner of Bridge Street and Dolefield and closed one side of Crown Square prior to the incursion of the Spinningfields development. The scheme takes the form of a nine-storey tower over a two-storey podium. The building is of note in LRW’s history insofar as it bridges the gap from the earlier utility of St. Andrew’s House and Chorlton Street bus station to their more refined work of the late 1960s. The construction sequencing was somewhat experimental insofar as the floor slabs were all cast at ground level around the in-situ cores and then jacked into position one after another, and gave an estimated time saving of twenty-five percent. The building was due for demolition; a new tower had been approved in its place. However, the fiscal climate perhaps demanded a more cost efficient solution and the tower has been refurbished and the podium remodelled to provide new retail units in 2013. It now provides the gateway to said Spinningfields site. This required a diagonal slice through the podium section that more directly connects Bridge Street to Crown Square. The glazing on the tower was replaced and some high value tenants have been installed throughout, including Simon Byrne’s restaurant that shares the name of the building itself. 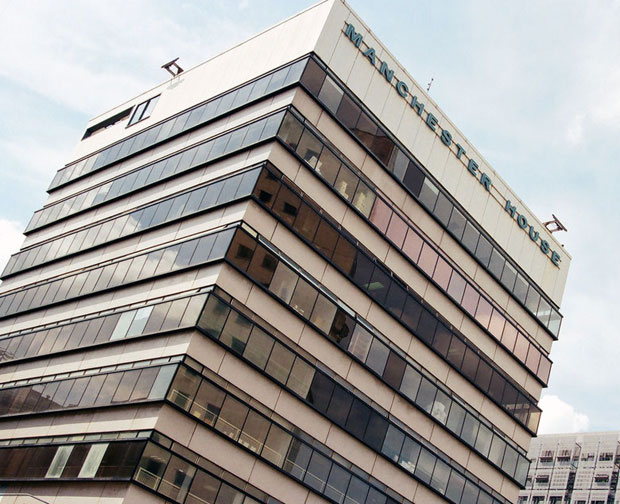