Highland House is of the LRW family of honest, rigorous 1960s commercial architecture. The building is now a mixture of private apartments and hotel rooms, formerly offices. The simple separation of accommodation and circulation is effective here, and whilst paint colours now express the contrast, originally this was an exclusively textural expression. The concrete panel system was the exposed finish to the structure. For a long time, and in stark contrast to the ornate Cathedral opposite, the grey monolith stood guard over the river and ‘gate’ to Manchester. Whilst attractive to concrete perverts, the leached grey tower was ultimately deemed ‘too ugly’ to remain as such, subsequently, during development, the white and blue paint was applied, the blue now replaced with a lurid violet, the corporate colour of the tenant, Premier Inn. This service core was constructed using sliding shutters in a continuous casting process. The density of the scheme on this tight site is also of note, though the podium was originally intended to be more expansive and flank the proposed ring road, which was to follow the course of the River Irwell at this point. 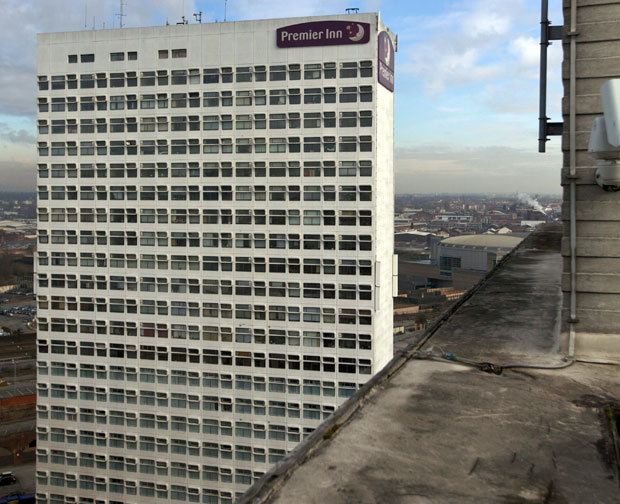