Some consider this compact building as a precursor to the ‘pop’ architecture of the 1990s, certainly the bold coloured volumes of the roof mounted cooling plant have a plastic quality, that designers like Will Alsop and Nigel Coates adopted. The floating fluid shapes above contrast against the orthogonal form below. The building is effectively divided in two, this is expressed clearly by the use of glazed curtain walling to one end and blue engineering brick to the other. The glazed section is open through all four floors and designed for the undertaking of large scale experiments and handling big pieces of scientific equipment. Initially, the service runs were all defined in their own specific colours, predating Pompidou by five years. Without explicit design intent, the filigree lattice of kit, transoms and mullions and the reflective nature of the glass provide a visual sense of the unfathomable mysteries of science, networked and interlocked in complex arrangements. At each floor a narrow band within the curtain wall extends laterally across the brick façade to provide clerestory windows to the labs and other accommodation, this lightens the whole building by defining the masonry as cladding rather than structure. The entire block is grounded by the use of a plinth wall at grade that extends beyond the block itself and continues to enclose the service yard. It also acts as the ground for the sober warning lettering, in Times New Roman, mounted either side of the gates. 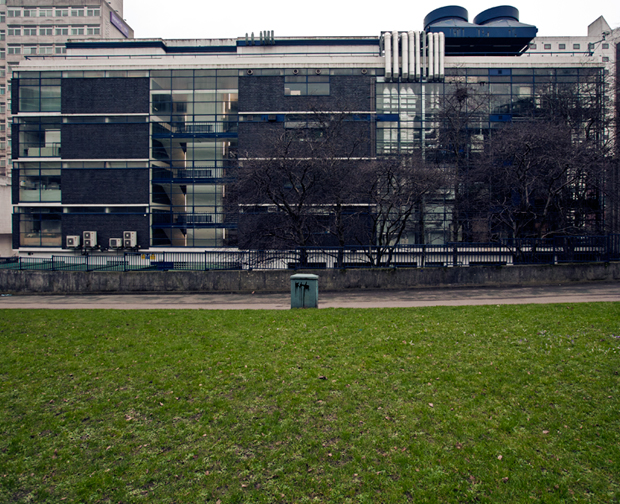