This late addition to the University of Manchester campus has been variously described as both dull and pleasing. Designed by the chair of the School of Town and Country Planning (Kantorowich) and the head of the School of Architecture (Hanson) as a bespoke scheme to house the staff and students from each. Both parties were South African, Hanson taking his post in 1963, two years after Kantorowich. The building has carried the name of the latter, but it is the work of the former that may be examined as precedent for this building; the Geology and Mining Engineering building at the University of the Witwatersrand is similarly a long bunker type construct with a repetitive concrete panel. It is the bunker like qualities of the Kantorowich building that polarises opinion concerning its appearance. The only clues to the internal arrangements come from the apparent mutations of the rough concrete cladding, sometimes spanning a single storey and punctuated, others, blank panels spanning two floors. Internally the spacious foyer provides for gathering and is largely finished as it was built; bush hammered concrete columns, ceramic tiles, hardwoods and flint lime masonry. An enclosed courtyard with spiral geometries that play against the rigidity of the façade is accessed from the foyer, this used to contain a sculpture by Hepworth, now only koi carp reside in the stepped ponds. 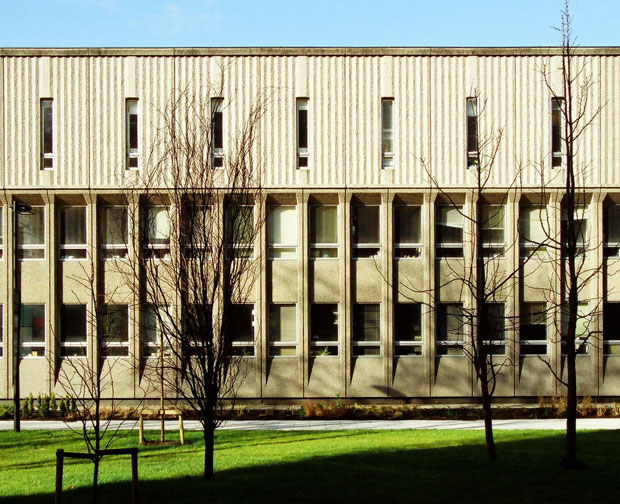