The phased development of Bury town centre by Fairhurst, through the 1960s and into the 1970s covered an area of over twenty-two acres and included retail, commercial, residential and vehicular planning and accommodation. The physical traces of the scheme are all but cloaked or altered as Bury has seen several subsequent undertakings to re-programme the centre. Remaining though, and most distinctive is the Market Hall. Evidently emergent from a modern tradition, most notably Saarinen’s TWA terminal, the butterfly roof, whilst striking, is not elegant or poised in the manner of other forms of its type. The structure minimises the need for intermediate columns and thus dedicates a higher proportion of the floor area to trading. The building was at risk of differential settlement due to known local geological faults, to overcome this the engineers proposed a hybrid solution of insitu and precast elements. The pre-stressed arched beams come to rest on a cast spinal box beam that has two clear spans of twenty-three metres with a jacking point at the intermediate supporting column. The box beam is hollow and acts as a high volume, low velocity duct for the heating system. Early photographs of the interior reveal the spatial simplicity afforded by these engineered solutions. 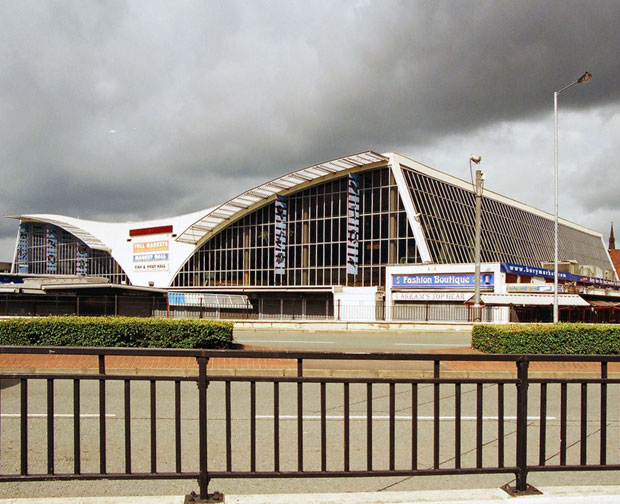