This is a later scheme within the company’s portfolio, but one that is very much aligned with their earlier work for the UMIST and the University. A relentless and unforgiving elevation composed of precast modular concrete panels is given some relief by the accommodation at roof level. Half of the building is sunken in an artificial dip from which rise exposed tapering columns, backed with a dark engineering brick. This gives an impression of the scheme as being raised on pilotis and clearly a latter day tribute to Corbusier. Mark Edge, project architect, had an early interest in environmental architecture and the utilisation of technology in the service of energy efficiency. It is probably the most repetitive and monolithic of their buildings of this period and as such actually retains an air of authority, even authoritarianism. Undoubtedly derivative and bound by budget, but nonetheless appealing by its sheer presence. To the front of the existing Town Hall a small purpose built computer building forms a shiny counterpoint to the concrete and was very much influenced by Norman Foster's building for IBM in Portsmouth. The whole complex was supposed to be further extended, but this never came to be realised. 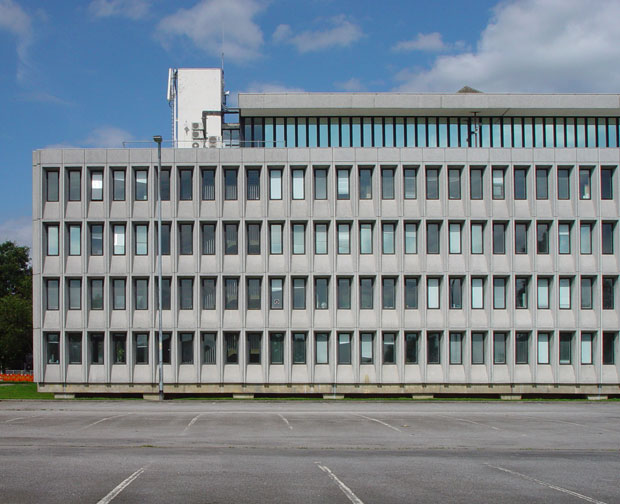