Bold enough to straddle a street, it comes as no surprise that this sweeping, stratified block was originally designed as a hotel, a function to which it has now returned. Its curved form was supposed to run parallel with the realignment of London Road and its mass to respond to the development of UMIST across the road. Its location was viewed as favourable as it was due to be next to the proposed underground station of the unrealised Picc-Vic line. A distinctive and pronounced floorplate was intended as a sound buffer to the traffic below, a means of minimising solar gain and as an access floor to clean the fully glazed façade. The pronounced vehicular passage provides for collection and drop off at the hotel reception. In the intervening period the building was home to British Telecom who furnished the open plan office landscapes in creams, oranges and browns that married with the brown mill-finished aluminium glazing bars and bronze solar glass. Despite the overtly retro tonal palette, the crisp definition of the floorplates and the proportions of the subdivisions within the glazing system lend this building a more timeless presence as its extremities stretch out to almost touch passing motorists on the Mancunian Way. The refurbishment has seen the replacement of the glazing with a similar system and a mostly sensitive touch up of the external envelope. The hand of the new architect only really exposed in a series of rather crude curved projections in pre-patinated copper that sit between the exposed cruciform columns at grade. 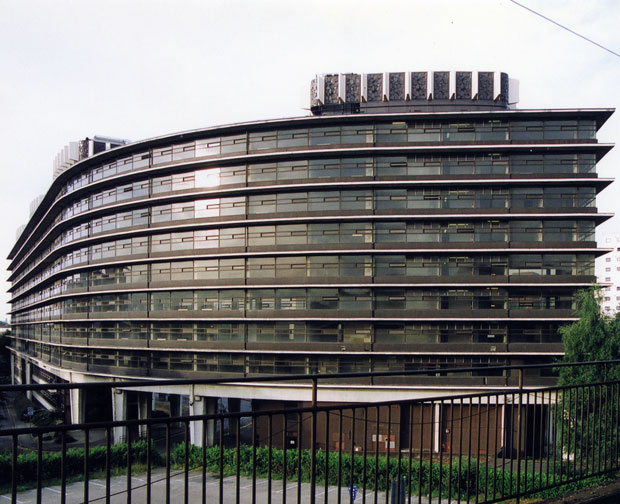