Essex, Goodman and Suggitt were retained as architects by the Greater Manchester Passenger Transport Executive for more than 30 years. They also designed Bury and Altrincham Interchanges after the collapse of the Picc-Vic project. This bus station and tower were prominent features in the townscape of Rochdale. The tower was known locally as the ‘black box’, for obvious reasons; a Metropolitan Guide from the late 1970s described it as a ‘skyscraper’! This was part of a wave of development in Rochdale town centre that included covered markets, a police station, a magistrates’ court and a shopping centre. This development was in some sense an attempt to define and reinforce Rochdale’s status as an independent borough, following the creation of Greater Manchester in 1973. Prior to its demolition in 2014 it remained, as many municipal buildings, largely unaltered, but in desperate need of repair. There were some fantastic and unexpected features to be found within. The foyer of the tower was the public face of the council services and connected via a bridge link to the nearby shopping centre. It was lined in brown tiles and had a contrasting pair of escalators clad in moulded GRP panels. Into the double height space, first floor offices with cantilevered curved, smoked glass walls were definitely of their time, materially and formally. What these buildings lacked in quality they more than compensated for with unintentional kitsch. 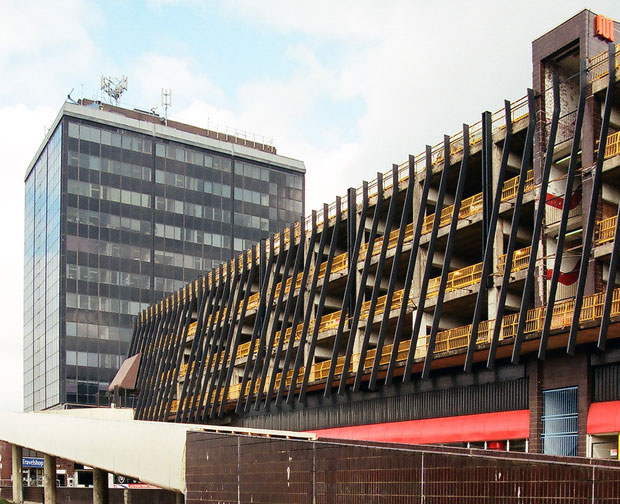