The Lowry is the key component of the programme of development at Salford Quays. It was named after Salford’s most famous son, the painter L.S. Lowry and as well as theatres, is the permanent home for the largest collection of his work, amassed by Salford Museum and Art Gallery since the 1930s. The Quays has had a mixed history of development over the last forty years, the former Manchester Liners Offices by Leach Rhodes Walker (1969, Furness Quay) was finished as the Manchester Docks had already entered decline. Salford City Council had an uncharacteristic moment of foresight in the 1980s when they purchased the land around the docks and commissioned a masterplan from Shepheard Epstein Hunter, who had also planned Wapping in London. The late 80s and early 90s saw some poor quality but pioneering construction filling the urban void. This building is the realisation of a simple diagram that places the solid blocks of the main theatres at the centre, surrounded by a flowing series of brightly painted spaces that contain restaurant, bars, shops and galleries. The external envelope has a deliberate transparency composed from mesh, louvres and glazing; intended to allow the viewer to anticipate the functions within. Seen from across the water the volumes can variously appear as composed or confused, dependent upon the aspect. The true success of this scheme can be measured on the occasion of a performance in the main auditorium when the sequential clarity is expounded by the ease of movement of large numbers. 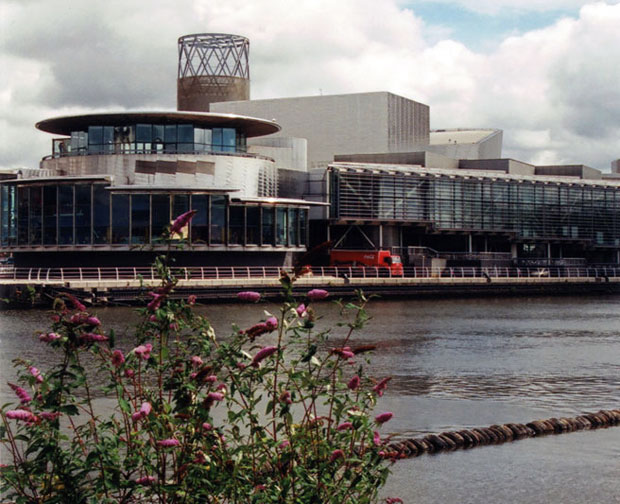