The Lock on Whitworth Street sits two blocks down from the site of the former Hacienda nightclub, now also a residential development, by Stephenson Bell. It is formed from two nine-storey blocks with a full height atrium that separates them and is traversed by bridges at several levels. The Lock is both contemporary and contextual; adjacent is the white faience facade of Barclay House (H.S. Fairhurst, 1914), the use of white terracotta here is both bold and appropriate. On completion, the orange balconies were viewed with mixed appreciation, but would something more restrained or another colour have made the same building? The roofscape makes a positive contribution to the skyline on every elevation; there is not a sense that this building has a back that had less attention paid to it than the front. Taking the train, west, between Deansgate and Oxford Road Station delivers a pleasing, distant view from the raised tracks, along the canal, of the back of the building. The internal atrium is also striking, white, light and filled with Flavin type coloured fluorescents, though the nautical language of the balustrades and exposed circular hollow section steel do date the architecture. 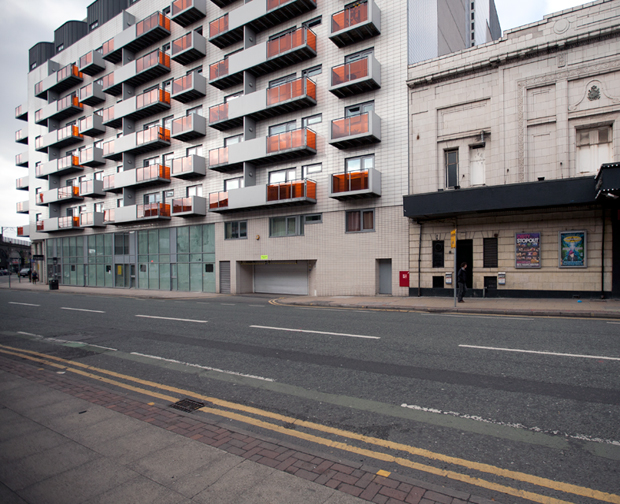