Ian Simpson has contributed significantly to the Manchester of the early 21st Century. The practice was part of the consortia that won the design competition for the city centre after the 1996 IRA bombing. The most significant physical element of that plan was the creation of New Cathedral Street, which forged a link from St. Anne’s Square to the Cathedral and opened up the area around Victoria Station. The use of large portions of glazing is evident in many of Simpson’s schemes, this being no exception. The delivery of the project rested with Jefferson Sheard, whilst the concept was Simpson’s; the original proposal born from the winning city centre masterplan. The bus, tram and car park facilities fit well enough, and the façade to the parking levels veritably glistens in the sunshine and glows in the dusk. The overarching canopy that physically links the tram stop and bus station feels slightly clunky, but the curving glass corners of the curtain wall to the waiting areas significantly softens the internal spaces. The perimeter wall is clad in brick slips and mosaic tiles, varying in their composition, desperately trying to be responsive to material context and the demands of the Local Authority. 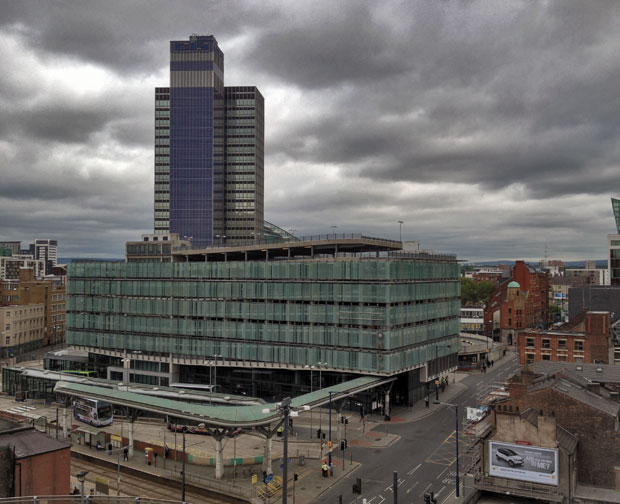