Perhaps the most celebrated of Manchester’s 1960s buildings; the CIS owes a lot to the work of SOM. Indeed a deputation of appointed architects, designers and directors had travelled to Italy, the USA and Canada to examine contemporary office design, including the Inland Steel Building in Chicago (SOM, 1958). The process of delivery lasted for 10 years, during which time extensive discussions concerning site, height and the impact of the scheme were held. The decision to make a tower was based on these visits and consultations. Since then, the simple and elegant twenty-five storey slab has held court over the north-east of the city, the smaller CWS tower joining it in a composition punctuated by a low conference hall building on a site sloping towards Victoria Station, itself above the River Irk. The neutrality of the external finishes was bold and well received at the time, one critic was pleased that the ‘temptation to dabble with colours of any kind has been resisted’. The strong vertical mullions are anodised aluminium, the blanking panels black vitreous enamelled steel. Keith Scott praised the quality of materials and the proportional geometry in his candid appraisal of ‘Manchester’s skyscraper’. He was less kind about the ‘low bustle’ of the podium and ‘tiny idiot owl [conference hall] between two colossal tree trunks’. It remains a good example of the International Style and was labelled Britain’s finest by Henry Russell Hitchcock, and he should know. An array of other artists and designers involved in the project included Misha Black and the Design Research Unit, John McCarthy, William George Mitchell and Vicenzo Apicella. The service tower was originally clad in a grey mosaic tile, but covered entirely in blue PV panels in 2005. The array of polycrystalline panels generates approximately 180,000kWh of electricity per year. The Co-Op have built a new headquarters across the road (One Angel Square, 3DReid, 2013), but continue to use some areas of this estate. 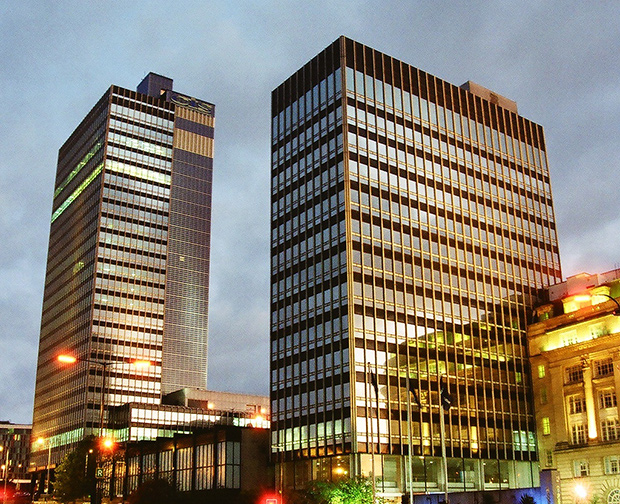