Housing a host of legal services including the City Magistrates’ and County Courts, District Probate and Registry, the building was intended to centralise these processes and alleviate demands on existing courts in the city. Probably the most inspired piece of architecture in recent years, this colossus of judicial power has presence, humour and technology abound. The presence of the judiciary within the Spinningfields Development adds a certain gravitas to the burgeoning commercial district. This scheme effectively does the same in terms of architectural quality; the generous budget has been put to dramatic and playful use. The cheeky, but highly appropriate, nickname of the ‘filing cabinet’ befits the colourful patchwork drawers of the cantilevered courtrooms as they dramatically project from each end of the giant grey metal box. A massive eleven-storey glass atrium provides good daylight to the circulation spaces. The scheme incorporates further sustainability measures; there is a ground water cooling system, grilled solar shading that also acts as a privacy screen and a large portion of the building is naturally ventilated using wind scoops. The brief was to provide architecture of ‘European standing’. It took an Australian firm to do so, but they have created a modern-modernist exposition of functionalist expressionism that is, simply, very good. 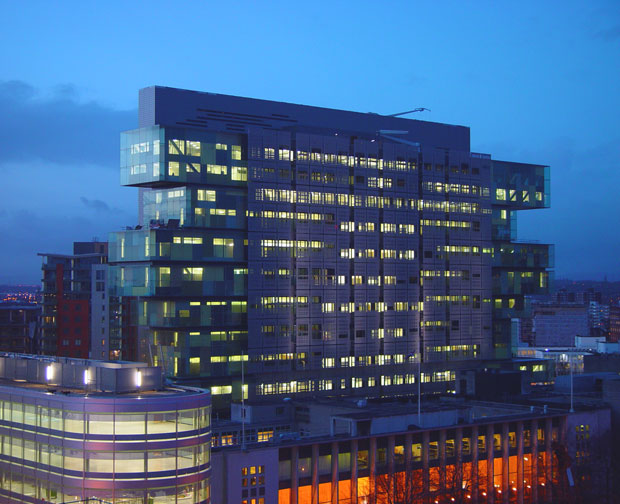