Under the guidance of Roger Booth, the Lancashire County Architect’s Department had a golden era between his appointment in 1962 and the structural upheaval following the Local Government Act (1972) and its implementation in April 1974. Before this restructuring the county incorporated the cities of Manchester and Liverpool and, whilst the major cities took care of municipal works within their boundaries, all of the outlying boroughs of Greater Manchester and Merseyside were under the jurisdiction of County Hall, Preston. Lancashire County Police had a need for a new divisional HQ in Bury as part of their existing Group Traffic offices were to be subsumed by a planned ring road. As well as traffic, the HQ housed mounted division, CID, and general operational divisions. Over 160 officers and 40 civilian staff were catered for in the two blocks of the headquarters which contained garages, stables, a hostel for unmarried policemen, kitchen, canteen, library, recreation rooms, a gymnasium as well as administrative and operations offices. The buildings were based on an earlier scheme delivered at Chorley in 1968 that ‘had the appearance of an administrative centre for a complex organisation’. Crisp and sharply defined facing materials in black and white were used at both Chorley and Bury and both were raised slightly from the ground level to accommodate entrances to garages beneath. At Bury in the sub-basement a shooting range designed to double as a nuclear bunker was fitted with blast doors that could be sealed in the event of an attack. Some of the floors were slightly recessed and the glazing patterns varied according to the activity behind, this was intended to ‘avoid the monotony of the glass box’. The result was a dynamic pair of objects with a civic presence, sufficiently hi-tech to sit well against the completed ring road and afford a sense of modernity in ‘the Seventies look of new police HQ’. The station closed in 2010 as a new purpose built facility opened nearby, less than three hundred yards from the birthplace of the founder of the modern police service, Sir Robert Peel. 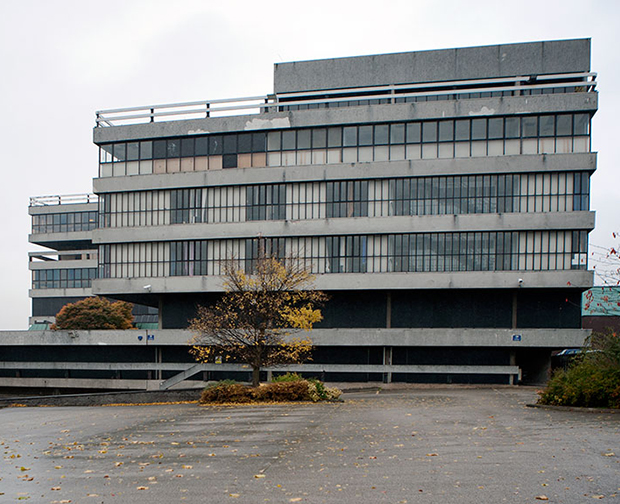