The Apollo Pavilion was designed by renowned British artist Victor Pasmore and named after the crafts that landed on the moon in the same year as its creation. The structure was seen as both sculpture and architecture in an era when the two arts were increasingly interwoven through advances in material compounds and production techniques. Pasmore (1908-1998) was a leading figure in post-war abstract art and from 1952 was leader of the art course at Kings College, Durham based in Newcastle-upon-Tyne. Between 1954 and 1978 he acted as Consulting Director of Urban Design for the Peterlee Development Corporation. Peterlee New Town was originally designed by Berthold Lubetkin and further developed by the Grenfell Baines Group (later BDP). The Apollo Pavilion was designed as an elemental component of a larger masterplan for the Sunny Blunt area, with the objective of the whole ensemble to be read as a single piece of landscape urbanism. Pasmore worked with architects Peter Daniel and Franc Dixon in the design of the estate and began designs for the pavilion in 1963. By the time it was constructed Dixon was no longer with the team. The work itself was constructed using in-situ cast reinforced concrete and is a series of interlocking rectilinear forms with cantilevered projections. It straddles a small pond that was artificially created by blocking the beck that flows through the site. Rising from the pond is a second sculpture of tubular concrete. Pasmore described the pavilion as 'an architecture and sculpture of purely abstract form through which to walk, in which to linger and on which to play, a free and anonymous monument which, because of its independence, can lift the activity and psychology of an urban housing community on to a universal plane.’ It has been suggested that the form itself owes its influence to Dutch avant-gardists such as Mondriaan and van Doesburg and Mies van der Rohe's monument to the German Communist martyrs.[1] The photographs in the gallery here were taken in 2006, before the Pavilion’s restoration in 2009. As such, the now restored abstract murals that adorn the implied interior of the upper level are barely discernable. 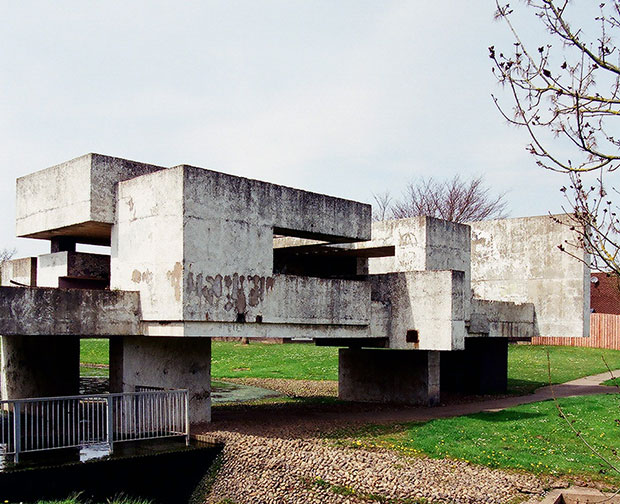