Park Hill needs no introduction to those frequenting these pages, it is perhaps the most famous concrete monument in the North. The Sheffield City Architect's Department was one of the pioneering local authority groups working in mass housing in the post-war period. Under the direction of J. Lewis Womersley between 1953 and 1964 the Department realised large numbers of new residential development in innovative arrangements reflecting new construction methods and new models of social clusters and neighbourhoods that were popular at the time. Parkhill itself was designed by Jack Lynn and Ivor Smith with F E Nicklin and John Forrester (artist); Ronald Jenkins of Ove Arup and Partners, engineer. Parkhill and its neighbour Hyde Park straddled and traversed the steep topography of the site perched above the main railway station. They were a looming presence and an enduring image of the city's robust character. More fortitude than forged, the bold angular mass has become synonymous with the fortunes of the city. As with many local authority housing schemes, Park Hill suffered from a lack of investment, a lack of good managment and a general disregard for the welfare of the building and even its inhabitants. Nonetheless, its deck access arrangements with bridges linking four ranges on the sloping site were successful for a time and remain dramatic and dynamic. The 995 flats were accompanied by shops, pubs, launderettes, public toilets, garages and was an inner city neighbourhood of its own. By the time of its listing in 1998 the building was as enigmatic as ever, but a little tired. Between 2007-11 a portion of the scheme was stripped back to its concrete frame and repurposed to designs by Hawkins\Brown Architects for Urban Splash developers. At the time of writing (2019) the rest of the estate is variously mothballed or lightly inhabited, awaiting further development. 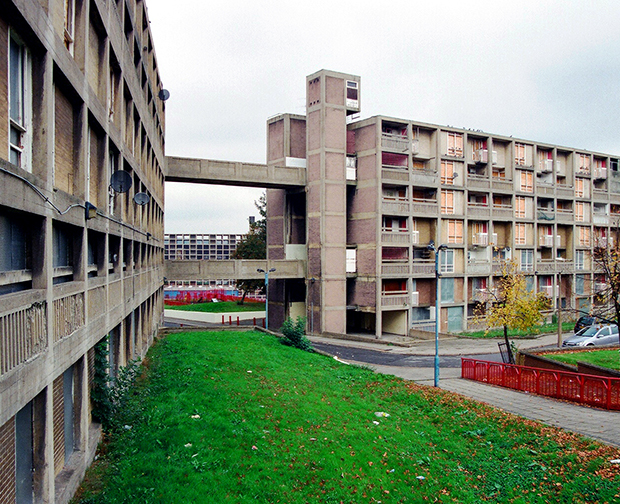