The brutal Harrogate House was fittingly built as the headquarters of Tilcon, quarrier and supplier of aggregate and concrete, on the site of several Georgian buildings. Its construction coincided with the decline of Harrogate’s popularity as a spa resort and the town’s conference industry was embryonic. As such the desire for inward investment led to the production of a number of post-war developments that one senses the town could happily erase from its collective memory. This rather contained, but nonetheless expressive, structure has a lower two-storey podium block that follows the contours of the adjacent streets and a squat tower of six-storeys that now contains apartments, but originally was office space. The lower floor of the tower is recessed to visually separate the two elements. The scheme is in a prominent part of the town and whilst out of character with the Conservation Area in which it sits, there are enough formal manoeuvres in the composition to know that a, architect has had some influence. The current painted finish, a pallid peach tone probably intended to mimic Yorkshire stone, is a little unfortunate, but its easy to imagine the unfinished concrete against the wind and rain of these parts was in a poor state at the point of refurbishment. Most notably for architectural history is that this scheme warranted the opening of a Harrogate office by Luder and was the gateway to his more celebrated work in the north-east of England. 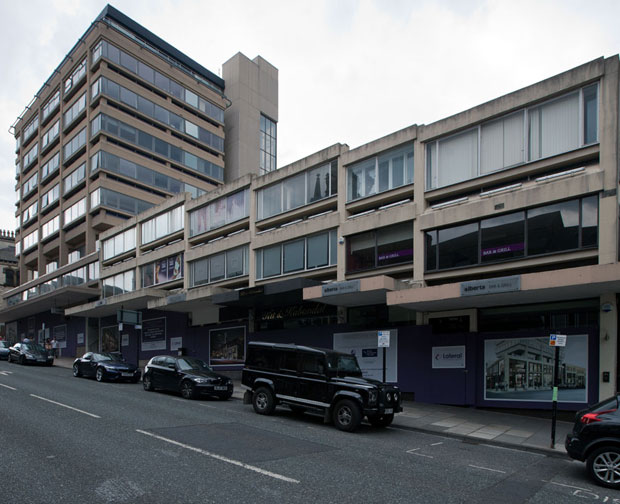