As Manchester's Southern Industrial area was promoted by the authority in the years following the end of the second world war, several high-tech and industrial companies began to build at the edge of the Wythenshawe estate which had been assembled in 1927, following a report by Patrick Abercrombie, and had seen a first wave of residential development in the 1930s with input from Barry Parker who had worked on early Garden City development at Letchworth, using the principles established by Ebenezer Howard. The situation of Wythenshawe perhaps allowed for companies like Ferranti to take advantage of a ready blue collar workforce in the overspill estate and those with more specialised skills from the stockbroker belt of Cheshire. A significant amount of new and highly secretive military technology was developed by Ferranti at this site, including the Blue Streak rocket programme. The Ministry of Supply were somehow involved in the commissioning of the labs, Ferranti Ltd. are listed as 'agents for the MOS'. Duncan Sandys, Minister of Supply, opened the new guided weapons factory in June 1954. Planning the layout of the 36-acre site had begun in 1950. It cost almost £1.3 million to build and equip the workshop and laboratories.

The buildings were steel framed, with external columns and beams encased in concrete. Infill panels were of a typical northern dark red brick rustic masonry. Most of the adjoining blocks were two storey although some single storey elements housed 'special laboratories'. The laboratory buildings themselves were portal framed so that there were no columns internally and the space was easily adaptable as technology and machining advanced. As such internal walls were simply formed from a bespoke sectional timber partitioning in offices and steel partitions in workshops and laboratories. Much of the servicing was integrated into the construction of the scheme, either within raised floor voids or within the wall or floor build up. The site was designed to accommodate future extensions and the movement and spaces between the first phase of buildings was considered to facilitate such. 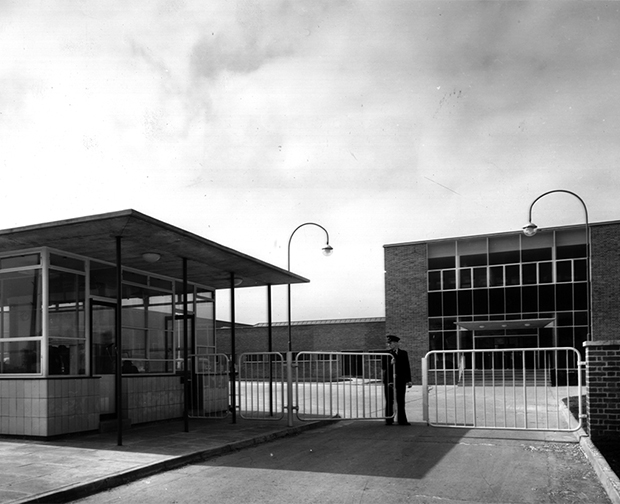