This scheme is one of the earliest tower and podium configurations to be realised in the UK. The formal arrangement was in place as early as 1958, as an artist's impression in the press at the time of the land deal testify to. John Madin's Post and Mail building has also been cited as an early maifestation of this type, but was not completed until 1964. The site was acquired by Unicos Property in the late 1950s from a Corporation that was struggling to realise its ambitious post-war aims. It is typical of the type of site released early by the authority in so far as it was in the midst of an area that had suffered from signifcant bomb damage and did not prejudice any of the wider, ring road driven, ambitions for the city centre. The Corporation had already built an underground car park for the site and H.S. Fairhurst and Sons had designed the adjacent Longridge House.

In order to articulate the two elements of the building the plant equipment was housed in an intermediate floor with a narrow footprint that visually separated the offices above from the shop beneath. The offices were accessed from a new plaza to the rear that would eventually knit into the Shambles development (also demolished) and link to Deansgate. The in-situ concrete frame was on a regular grid and a conventional solution for the time, though Matthews and Mumby were known for their elegant and experimental techniques as seen in their own factory in Denton. In this respect the 'lively feature' of an 'undualting concrete shell canopy' was both expressive and exciting; it was only 100mm thick and cantilevered over 2.5m from the face of the building. The shell was actually stronger than the equivalent slab canopy and as it was thinner was also coparitive in terms of cost. a severely limiting factor everywhere, but more marked in commercial architecture outside of London.

In this scheme W.A. Gibbon made his first use of white concrete as a deliberate material choice intended to compliment the more expensive Portland stone. White concrete would come to be Gibbon's signature in his later buildings and was especially well applied in his series of buildings at UMIST. The tower element of the scheme has a lighter appearance than earlier C&S buildings of a similar scale, this is down to the primary structure being set inside the external wall line and allowing the use of narrow external columns, slender window frames and mosaic faced spandrel panels, which all contributed to an airy appearance. This lightness was further emphasised by the monolithic vertical circulation core. Marks & Spencer were the first tenants on this site and remain there today in a new building by designed by BDP in the wake of the 1996 IRA bombing. 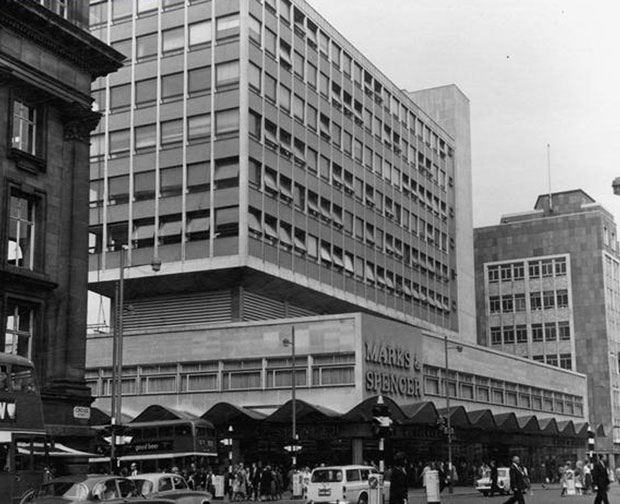