The ecumenical chaplaincy, which flanks Wilson Womersley’s Precinct Centre on Oxford Road, was designed by Cruickshank & Seward. As well as the main celebration space (sadly altered in the 1980s) there is a small top-lit chapel for contemplative prayer accessed from one of the aerial walkways (a legacy of the city’s response to the Buchanan Report). In an increasingly secular world and with one eye on preservation it seems that religion is one of the few devices that guarantees the continuity of space and material that is often otherwise lost.

The Chaplaincy itself is accessed by a set of ceremonial flight of steps leading from a landscaped courtyard fronting to Oxford Road. Through a small foyer, the main celebration space opens and is lit by slot windows on two elevations, behind the celebrant. The remaining softwood features are also in vertical bands which compliment the array of the apertures. The alterations to the space to enable lectures to take place have resulted in the loss of some original fittings and somewhat compromised the interior sensation. The robust rear elevation that is punctured only by the slots to illuminate the main celebration space still retains a sense of power. The fact that this small scheme sits between two buildings means that it is sometimes lost visually and, to a certain extent, anonymous. Its role as a ‘transitional’ building, both in a physical and connective sense and in the oeuvre of C&S and vernacular modernism makes it relevant to the post-war era. 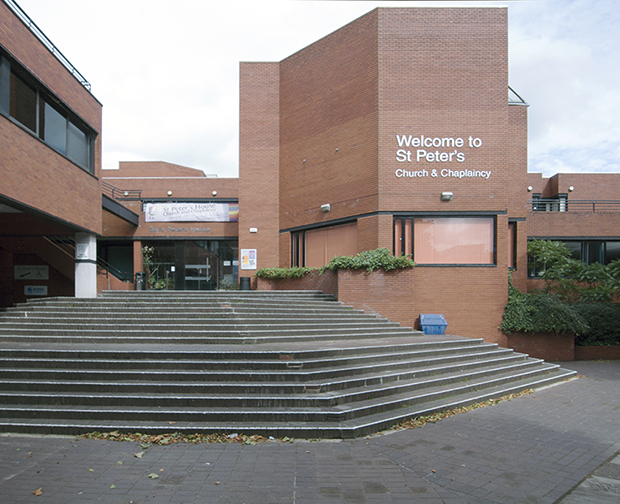