Demolished 2016. Radcliffe Civic Suite was commissioned as a statement of civic pride by the former Radcliffe Borough Council. Prime Minister Harold Wilson opened it in 1974 shortly before Radcliffe became part of Bury Metropolitan Borough later in the same year. The building nestled into the hillside and was deliberately set so as to reveal the church tower behind. The entrance canopy was deep and accommodating and originally would allow cars to sweep beneath and then to exit in one clean arc – this access was altered and the sequence was not quite so fluid. The hand made Butterley brick façade formed a series of curved walls and gently sloping copper roofs leant against the main volume. The plan form was influenced by Alvar Aalto and worked as a series of smaller, cellular spaces wrapped around a main hall. The main space could be subdivided using a mechanical sliding partition. Structurally the load bearing external walls carried variously beams and trusses. The foyer and bar area had a ‘striking array of timber and steel bow-spring trusses’ and the main hall had deep Columbian pine laminated beams. The use of materials in their natural state throughout gave a real honesty to the finishes and they resonated with one another. 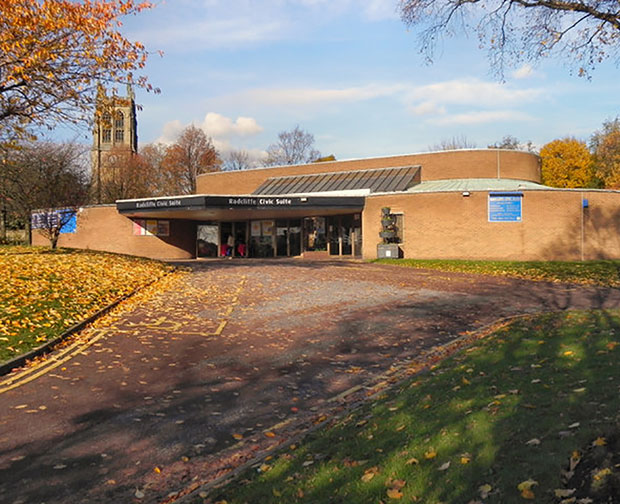