This small group of apartments, nestled behind a late Victorian house in the leafy suburb of Didsbury, exudes an air of quality and restraint. The complex has a manifest discourse between hard and soft, defensive and open. To the perimeter the predominant material is masonry, even used as a soffit lining to the return over the balconies. The internal faces of the courtyard use floor to ceiling glazing and treated hardwood and have a much more open aspect. The detailing to the brickwork of the boundary walls and the piers of the access gates is clearly considered and visually compliments the adjacent buildings. The scheme was developed to be flexible enough to accommodate either high-spec office or residential functions; the client erred toward the latter as the project neared completion. The sunken parking beneath the buildings releases the internal courtyard to landscaping and the entire scheme benefits from this calculated gesture. There is no doubt that in time this development will weather and marry itself comfortably into its environs, potentially imperceptible, such is the siting and the enclave afforded. 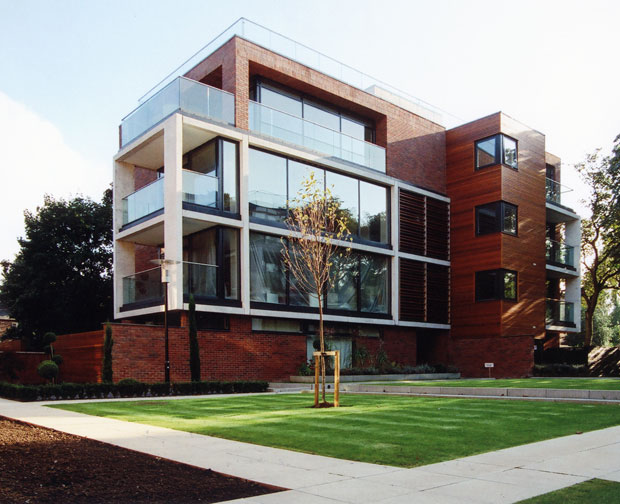