J.W. Beaumont was a Victorian architect responsible for, amongst others, public buildings in Hyde, the practice ceased to exist c.1967. The mannered neo-classical portfolio of the practice was, at this point, teetering on the edge of being subsumed by the wholesale transition to the practice of modern architecture. Other firms in Manchester were more adept in the adoption of modern styles. Affectionately known as the Kremlin due to the hard leftist politics of the student body in the 1970s and 80s, this building has suffered in the dark grey staining of the Portland stone from the continuous stream of buses that process daily along the Oxford Road corridor. The austerity of this scheme seems to belie the prospective vivacity of the student body. It is as if the civil, slightly authoritarian language were intended to calm the occupants. The adjacent refectory and halls of residence, Moberly Tower (1965. Demolished 2009), were also by Beaumont’s and signalled their late motion towards a more contemporary approach using an expressed concrete frame and floor to ceiling glazing. However, when considered alongside the buildings that came forward as part of the Education Precinct plan, even this feels stuffy. 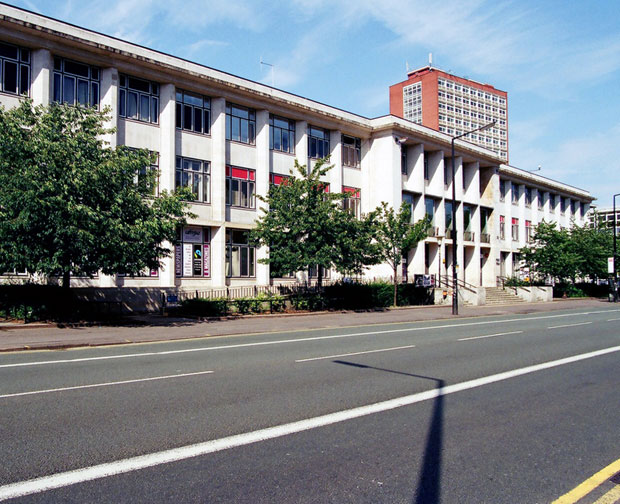