This small building is actually something of a monument, a testament to the worth of the massive engineering endeavours of generations past. It is the terminus of the eighty-two mile long Haweswater Aqueduct and houses the inlet valves to the reservoir at Heaton Park. The design philosophy of the North West Water Company had shifted by this time from the pseudo-romantic to the functional and contextual, though in this commission the brief was to provide a ‘certain monumental character giving appropriate expression to the magnitude and importance of the undertaking’. The restrained modern classicism present in much of Howitt’s work was the perfect approach to answer this challenge and deliver a scheme that has a something of the stiff upper lip about it; the right balance of functionality and sentimentality. The building is symmetrical and is accessed by a stepped ascent, ascribing mausoleum like qualities, reflected in some of the non-functional elements of the brief. Internally, the single space is lined with Travertine marble and Swedish marble forms the contrasting skirting and architraves. The joinery is all in teak. A sectional diagram of the aqueduct route in sycamore veneered blockboard is hung on the rear wall and permanently sealed in this ostentatious chamber. Externally, a figurative bas-relief by Mitzi Cunliffe in Westmorland greenstone symbolises the route of the watercourse and the work of those who built it. Directly beneath are a series of tablets that record the names of people involved in the project with space for future contributors. The fact that the building has little or no formal discourse with the street only serves to reinforce its desired monumentality. 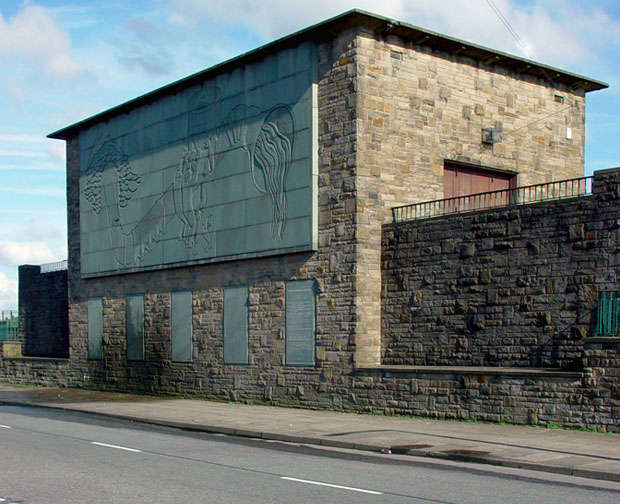