It took a while to ascertain who was the architect for this mannerist modern extension to Waterhouse's neo-Gothic Natural History Museum. British History Online records G.A.H. Pearce of the Department of the Environment as author. Fortunately, Royal Kensington Borough Council archived a rather well researched document on the architectural history, based on the Museum Archives, presumably attached to a planning application. Unfortunately, the excellent section of a bigger report has no header or footer crediting the author. I’d be glad to find out.

Pearce was involved somehow, but his was not the loudest voice. By the mid 1960s, following a split with the British Museum in 1963, the Natural History Museum realised the need for a larger palaeontology department. The first architects to be involved were Eric Bedford and Rolland Greatrex of MPBW. Their 1967 scheme proposed a three and five storey extension with an arcade of pilotis, the taller mass was to be closest to Exhibition Road. In 1968 and 1969 the developing scheme was presented to both the Royal Borough of Kensington and Chelsea Planning Department and viewed by the panel at the Royal Fine Art Commission. The inclusion of the tower was one outcome of the reviews and was thought to ‘maintain balance over the whole structure’. The planners also insisted that the building line was kept as far away from Cromwell Road as possible, to preserve the open space to the front.1

Pinckheard and Partners were appointed as consultants in 1970, principally for construction detailing, specialist laboratory specifications and to act as site architects - Harry Neal as project architect. Greatrex of the MPBW was still sponsoring the project, but, by 1972 the restructuring ushered in after Edward Heath’s election victory of 1970 brought the works under the new Department of the Environment. As the construction concluded, the DoE staff, headed up by James Ellis were noted as primary architects. Correspondence from the construction project indicates that attribution was an issue. Eventually, it was judged that attribution lay firmly with MPBW, particularly W. Kendall and Rolland Greatrex, with some input from Eric Bedford and G.A.H. Pearce.

It is clear that the design was a product of consultation. For all of its awkwardly stark contrast against the original museum building, it does strike a weird accord with it. The concrete exoskeleton is a sort of Space 1999 meets York Minster outcome that couldn’t be more 1970s if it tried. Aided and abetted by the selection of frosted windows and black spandrel panels in the curtain wall behind, the façade undoubtedly has depth. The use for the colonnade is hard to understand, it’s a very shady spot, that supports no through route. In a way the mixed up building is a product of its mixed authorship with manifold inputs. Nonetheless, it has its place. 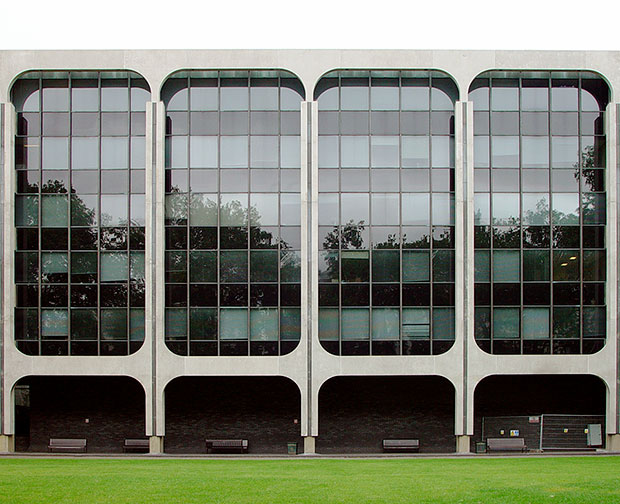