Granada Studios is not the most striking modern building in Manchester; it is however, the only building by Ralph Tubbs. Tubbs designed the Dome of Discovery at the Festival of Britain in 1951. The entire complex was built over a period of ten years from 1956. It was delivered in two main phases, the first phase rather hurriedly as the commission for independent television was granted in 1954. Cruickshank & Seward acted as delivery architects for Tubbs on this first studio building, which took only one year from commission to completion. The largest building of the complex is probably the finest. Granada House was amongst the earliest buildings in the city to use the curtain wall method of construction and the first post-war commercial building in Manchester. Highly polished black sills punctuate the envelope, composed predominantly of light grey granite and glass, these in turn separated by white marble and grey limestone. It was intended that this façade faced onto the new inner ring road as proposed in the 1945 City of Manchester Plan, the road was never built and the building is now largely hidden by new development. The quality of the building has meant that the façade has required little in the way of repair, leaving the original external envelope unaltered. An iconic internally illuminated sign, GRANADA TV, which was something of a sentinel to the city, was removed in 2010. ITV left the site for new premises at Media City, Salford in 2014. The whole area around has been named St. John’s Quarter and is the next phase of the total redevelopment of central Manchester. 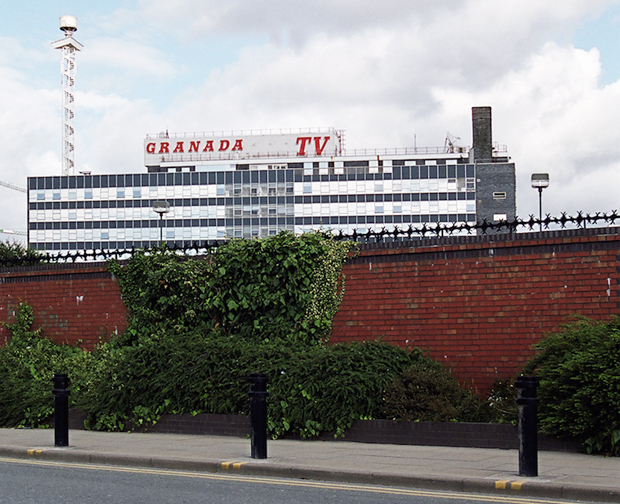