The reductive nature of the detailing to the stone reveals and cills makes this an anonymous, almost neutral gesture at the corner of Albert Square. Consistent in the use of Portland stone with earlier buildings by the same firm, this building has aged well. It was a bomb damaged site and was rumoured to contain some scattered fragments of the previous building, though the redevelopment was sufficiently comprehensive to move the building line at the rear inward by three metres. The reduction in the numbers of craftsmen meant that for this building, in 1957, to compete in with the latter day Victorian facades of Waddington and Dunkerley’s adjacent Northern Assurance Buildings (1902), was impractical, if not inappropriate. Whether or not this concerned the architect is purely speculative, but the almost minimal approach certainly succeeds. At the time construction techniques in this country were rapidly shifting toward mass production, off site fabrication and the like. Pearl Assurance House shows none of the development of 1950s design, instead in a typical provincial time lag, the sparing details still make reference to pre-war deco styling. Here though, this illustration serves to demonstrate the slow aesthetic shift of architecture in post-war Manchester. 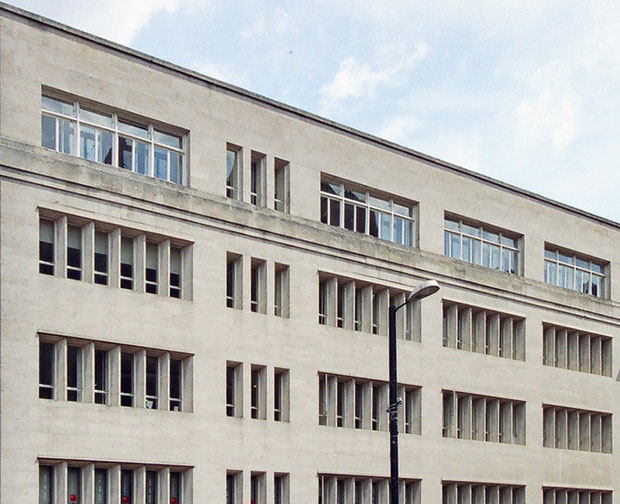