The Renold Building was designed by W. Arthur Gibbon of Cruickshank & Seward. It was one of a suite of white concrete structures on the UMIST campus in Manchester. It was the first of its type in the UK – an entire building to house lecture theatres and seminar rooms. It is also one of the earliest UK projects to assume a tower and podium configuration after SOM’s Lever House in New York. The visual separation of the tower was achieved by the use of elegant birds-mouth beams that facilitated the continuous clerestory window at the junction of the two formal elements. Its most striking external feature was the faceted east façade, its form generated by the acoustic requirements of the small lecture theatres in the tower. Gibbon wanted the student population to provide life and colour to the scheme, thus the large circulation areas were treated neutrally and provided the backdrop for a mural by Victor Pasmore. The most prominent device for display and circulation however was the stair tower, a perpendicular projection of perilously thin glazing bars. This element was a part of the evolving modern language of the firm. Here, it was purposefully employed to encourage students to use the stairs, by affording great views, and in turn put the students on display. The visible lid of the podium had an applied diamond check pattern in bonded gravel and rooflights positioned in a deliberate composition. In a final flourish for the exterior, and with a nod to Niemeyer and Nervi, Gibbon introduced a curved profile to the rooftop plant room. 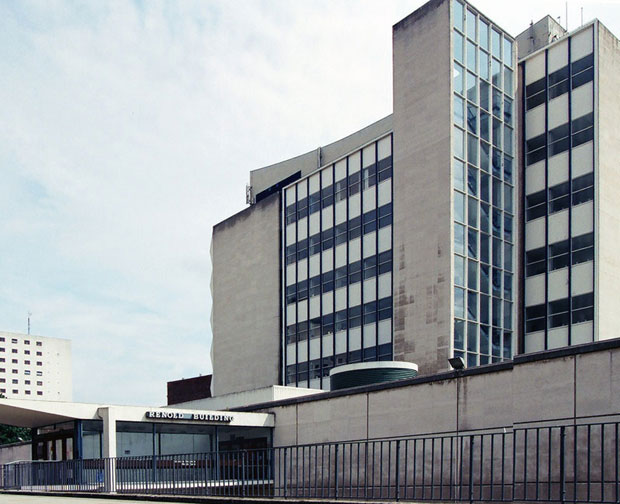